Heat on China to act fast on housing prices 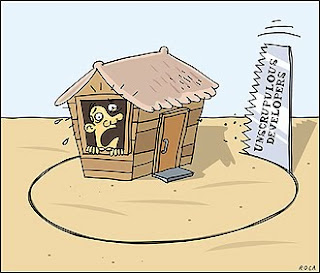 LAST week, the blockbuster Avatar was pulled from China's cinemas after topping the box office for three weeks. It was getting too popular.

The movie had struck a chord with viewers all too familiar with residents being forced out of their homes by unscrupulous developers in cahoots with corrupt officials. Skyrocketing housing prices in China have led to much unhappiness.

But yanking a film is the easy part. To manage the inflated real estate prices in China is far trickier. The government must deal with the nub of the problem: the incestuous relationship between property developers and officials who exploit the government's monopoly over land supply.

In some cases, the relationship is as sleazy as the affairs that a beautiful Qingdao real estate tycoon had with three top officials - Qingdao mayor Du Shicheng, former finance minister Jin Renqing and state-owned oil giant Sinopec's former chairman Chen Tonghai - to clinch lucrative land deals at below-market prices. Hauled in by investigators last year, the mistress ratted on the three officials.

But most times, the collusion between developers and officials is not so easy to stamp out as it is embedded in the land reserve system. Local governments have the power to determine how much land can be acquired forcibly from residents or how much reserve land can be released and sold to private developers in a competitive bidding system.

Chinese developers tend to hold the land they buy until it rises in value before they build. But as Beijing itself has acknowledged over the past two years, many developers are actually hoarding land to limit supply of housing, thus driving up prices of existing property and creating panic among home-buyers.

According to Beijing-based Soho China's chairman Pan Shiyi, about one-third of developers reap most of their profits from holding onto land until it rises in value before selling the land for a profit or building properties that they can then sell for a much higher price.

Until this year, the authorities also closed one eye to developers who had long flouted the rule of paying a 20 per cent fee on the transaction price of land left idle for more than one year.

Beijing knows only too well that housing woes - cited by the Chinese as one of their top 'sources of pressure' this year in a recent nationwide poll - present a key threat to social stability. It is finally getting tough on this longstanding problem of land hoarding.

This year, with some 10,000ha of land approved by the government for real estate development still unused, Beijing said it will enforce the 20 per cent rule. Land plots left idle for more than two years will also be reclaimed by the government, it declared earlier this month.

Local analysts have called this a big step in reining in China's runaway housing prices, which shot up in December by 7.8 per cent across the country - its most frenetic pace in 18 months.

But this affects only the private developers. For officials in local governments - the other partner in the collusion that keeps property prices high - the incentive to collude with developers is not affected.

After all, they rely heavily on revenues derived from real estate. Local governments reap about 40 per cent of their total revenue from the sale of land and property development taxes, some local economists estimate.

Beijing has tried to control how local officials sell land with a new rule requiring them to apply annually to the central government for land allocation with a proposal on land use. Once approved, the local officials distribute the land for different purposes, such as housing, commercial and industrial uses.

But there are loopholes. Local officials can claim that the land is meant for, say, a business park or public sports centre, but auction the land off for a package deal with a lucrative residential component.

As prominent Chinese economist Zhou Tianyong pointed out, the only way to cut the costs of building affordable homes for ordinary Chinese is to 'cut out the root of the problem' - the government's lucrative land monopoly.

One way is to liberalise the land supply market, he said. Allow individuals or groups of land owners to sell the land themselves rather than surrendering it to local officials. This may close the loophole for unscrupulous officials to forcibly evict residents.

But this would mean an overhaul of China's property rights laws, which could take years.

And the coffers of local governments, already burdened with a big bill for last year's stimulus measures to spur an economic recovery, would also be hit if land sales cease to be a major source of income.

So Beijing would also have to look at ways to help local governments further diversify their funding, using more instruments like bonds. But can the masses of Chinese saddled by housing woes wait this long for a solution?

Not that long, if Avatar's popularity and its depiction of an uprising that booted out the powers-that-be is any indication. The Chinese government knows that it has to act - fast.