The first decade of the new millennium has been one of profound change. In Part 2 of our series looking back at the highlights of the past 10 years, The Straits Times examines the wild economic ups and downs that drove people to cheers and tears in a period marked by extreme volatility.
By Fiona Chan 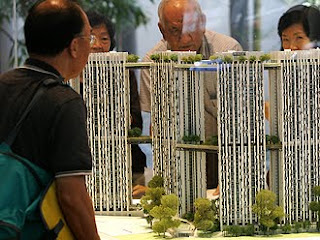 In Singapore, the property market kicked off the decade with an unprecedented slump, then set all kings of sales records by booming not once, but twice in the period: first in 2007 and again this year.


MORE than 2,000 years ago, astrologers came to the conclusion that the earth was round.

But in the decade just past, economists have discovered that the world is a whole lot flatter than they thought.

From stock market plunges to disease epidemics, it seemed no economic disaster could occur in the last 10 years without triggering a contagion that quickly spread halfway across the world.

And there were plenty of disasters to illustrate this, in what may well go down in history as the decade of economic shocks.

It started with the bursting of the dot.com bubble in the United States in 2000, which sent global markets crashing at the beginning of this decade.

The subsequent downturn was exacerbated by the terrorist attacks of Sept 11 in New York in 2001. That dragged Singapore's economy into what was at the time the worst recession in its history: a painful contraction of 2.4 per cent in 2001.

Just as economies were recovering, the outbreak of Sars (or severe acute respiratory syndrome) sent a fresh round of shock waves through the system and threatened one of the fundaments of globalisation: air travel. Singapore's economy shrank in the second quarter of 2003 by what was then the biggest contraction in a single quarter.

But all these worst-ever records were broken even before the decade was up. The sub-prime mortgage crisis that imploded in the US in 2007 turned into a massive financial crisis that touched virtually all corners of the globe via a worldwide recession, the likes of which had not been seen since the 1920s.

Singapore saw its economy shrink by 11.5 per cent in the first quarter of this year, and issued a dire prediction that the economy would shrink between 6 per cent and 9 per cent when the year was up - making all its previous recessions look like temporary blips.

Still, the decade was not all just bad news. When there were booms, they were big ones - and the whole world enjoyed them too.

Between 2004 and 2007 blossomed a golden age of easy lending and free spending, causing a sharp spike in the prices of oil, food, stocks and property, among other things, noted Nanyang Technological University's head of economics, Professor Euston Quah. Speculators rushed in for a quick buck, creating asset bubbles around the world.

What all this led to was a decade of economic extremes, a 10-year period of volatility like no other.

It started with one big downturn and ended in another, exploding the myth that the 21st century would bring a moderation of ups and downs - a myth exemplified by current British Prime Minister Gordon Brown in the 1990s when he promised 'an end to boom and bust'.

But booms and busts continued to reign at home. In fact, the period between 2000 and this year marked the first time Singapore experienced two recessions in a single decade.

The property market kicked off the decade with an unprecedented slump, and then set all kinds of sales records by booming not once, but twice in the period: first in 2007 and again this year, sending home buyers and office tenants into a tizzy over budgeting and timing.

For companies, investors and individuals, the 2000s brought the realisation that business and economic cycles have shortened and become more violent - and they would have to keep pace to avoid being caught wrong-footed by the sudden and dramatic ups and downs.

AT THE root of the extreme volatility of the last decade was the huge surge in globalisation over the past 10 years.

China finally joined the World Trade Organisation (WTO) in 2001, a symbolic start to a decade that saw countries establishing closer and deeper economic ties to one another. This helped create growth far beyond what any single economy could achieve alone - but also ensured that the economic fate of each country was inextricably tied to those of the others.

The volume of world trade more than doubled from US$6.2 trillion (S$8.7 trillion) in 2000 to US$15.8 trillion last year, the latest full-year figure for world merchandise exports available from the WTO.

In Singapore, total trade surged 97 per cent from $470 billion in 2000 to $928 billion last year, according to International Enterprise Singapore.

ew regional and global organisations also sprung up and advanced. The first euro notes and coins were issued in Europe in 2002, creating a strong and stable currency that would become a credible substitute for the reigning US dollar by the end of the decade.

In Asia, emerging economies grouped together for strength and influence on the world stage. Asean entered the 2000s with the newly formed Asean Plus Three - which allied the organisation with China, Japan and South Korea - and took this one step further in 2005 by adding India, Australia and New Zealand to the mix to create the East Asia Summit.

Indeed, it is impossible to recount the 2000s without heavily featuring Asia - in particular, the rise of China and India. Alongside their Bric counterparts Brazil and Russia, the two most populous countries in the world emerged this decade as the growth giants of the century.

They helped Asia power ahead via close regional trading relationships, but not without creating problems in rival big economies.

These problems came to epitomise the ills of globalisation. China and India have been accused both of stealing jobs from developed economies with more expensive workers, and of carelessly adding to the populations of other countries through the emigration of their considerable citizenry.

Another whipping boy of globalisation was the new investor of the decade: the sovereign wealth fund.

Cash-rich state-owned funds poured their country's reserves into global stocks and assets, giving rise to concerns about politicising economic investments while tying their own economy's fortunes to those of the rest of the world.

On the global arena, the shift from the Group of 8 to the Group of 20 as the leading forum for multinational discussions and decisions marked a rising realisation of stronger linkages between an increasing number of countries.

But the deeper interconnectedness of markets and institutions has also paved the way for bigger and more international crises. If the fall of one economy drags all the others down, it makes it that much harder to return to a recovery.

As OCBC Bank economist Selena Ling puts it: 'Markets that boom together may also fall together, as economies become more synchronised.'

OF COURSE, globalisation in the 2000s was not a phenomenon limited to governments and economies.

Companies and consumers also benefited from the collapsing of borders and boundaries - not just across countries, but also in terms of financial regulation.

The free market free-for-all that was the mantra of the 2000s led to a decade of excesses.

There was certainly lots to spend on, especially for consumers. The decade that introduced the iPod and iPhone provided plenty of fodder for heedless consumerism, exponentially encouraged by the growth of the Internet.

Shoppers took quickly to online retail portals such as Amazon, which posted its first net profits in 2002, as well as to Internet and mobile phone banking.

Investors also latched on to complicated global financial instruments that allowed them to invest in countries and companies they had never seen and, ultimately, knew nothing about.

But the era of cheap credit, irresponsible spending and reckless borrowing helped to both intensify the booms and aggravate the busts.

Early in the decade, firms borrowed more than what they were worth in the tech boom. Mid-decade, American individuals borrowed on the strength of their unsustainable house values in the golden years. By the end of the decade, governments were forced to borrow heavily against future generations to end their current recessions.

A deliberate lack of regulation in favour of letting financial markets run themselves eventually resulted in a decade of ignoring entrenched problems - including huge individual debts and the global imbalance of China lending generously for America to spend liberally - and hoping they would magically disappear.

It is no coincidence that the decade also saw some of the biggest corporate scandals in history, including the accounting frauds at Enron and WorldCom and the largest-ever Ponzi scheme of Bernard Madoff.

The need for greater regulation

IN ASIA, however, it was a different story: Rather than extravagant spending, the 2000s were a decade of prudent saving - and almost constant fire-fighting.

The region started the decade crippled by the Asian financial crisis of the late 1990s and took another big hit from Sars in 2003, but it learnt its lessons from those shocks well.

Asian governments strengthened their banking systems, hoarded cash, and closely managed their financial systems, flouting Western economic laissez-faire theories. In 2000, developing Asia's reserves amounted to US$710 billion; by last year, the figure had jumped to US$3.4 trillion, according to the Asian Development Bank.

This meant that when the global financial crisis hit, the region was able to erect strong shields with liberal spending policies and careful monetary management.

In Singapore, the decade saw important economic reforms that intensified the Government's presence in the markets. Indeed, the period was bookended by two task forces set up to chart Singapore's longer-term growth: the Economic Review Committee in 2001 and the Economic Strategies Committee this year.

If you had owned a private home in Singapore at the beginning of the decade, that home would have been worth about 10 per cent more in the third quarter of this year, going by the Urban Redevelopment Authority's property price index.

HDB flat owners would have been better off: Resale flat prices shot up roughly 30 per cent in the same period.

As we wrap up a decade, Singapore is in a strong position: on the verge of an economic recovery with its fundamental growth drivers intact and the integrated resorts opening in time for a new decade.

But as we enter the 2010s, the problem of heightened volatility remains - and the signs of new difficulties are already flashing red.

The still unresolved problems of the last decade are getting more difficult to tackle by the day, as Western governments continue to rack up massive debts they will soon have to reckon with.

Economists from the United Nations have also warned that asset bubbles are reappearing in economies all over Asia, a situation that will likely worsen in the next year and further magnify the economic cycles to come.

If there is one thing this decade has proved, it is that none of these problems are isolated ones. When the modern world entered uncharted territory with its worst recession this year, governments across the globe realised unprecedented coordination was needed.

Now, to manage the amplified volatility that looks to be a hallmark of the 21st century, governments will need to get their acts together on regulatory reforms - if not for their own sakes, then at least for the rest of the world's.