More investment deals worth above $100m

THE trend of small deals dominating property investment sales deals in Singapore seen in the first three quarters of this year is reversing, according to DTZ Research.

There were eight transactions above $100 million each this quarter, accounting for 77 per cent of the $2.5 billion total transaction value in the fourth quarter – up substantially from a 48 per cent share (with six deals) in Q3. The total investment sales tally for Q3 was also around $2.5 billion. 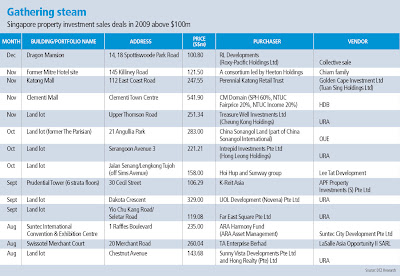 There were no deals above $100 million in the first half of this year.

DTZ figures showed the total investment sales for the whole of this year came to about $5.9 billion. This is significantly lower than CB Richard Ellis’s estimated $9.4 billion year-to-date tally provided to BT earlier this month.

DTZ South-east Asia research head Chua Chor Hoon explains that the lower figure for her firm is due to DTZ excluding transactions of single apartments as well as landed homes and residential sites which cannot be redeveloped into more units – even if these are priced at at least $5 million apiece.

CBRE includes sales of apartments and landed residential property with a value of at least $5 million. Earlier this month, it predicted investment sales for 2010 could be in the region of $15 billion, with 2010 expected to be a recovery year for the Singapore economy.

Yesterday, Ms Chua said that based on DTZ’s methodology, her investment sales forecast for the whole of 2010 could exceed $10 billion.

In addition to improving market sentiment, she said that ‘much activity will come from the Government Land Sales Programme, which has eight residential sites in the confirmed list to be released for tender in the next half year’.

‘The residential sector, which has recovered in 2009, is likely to continue to dominate as developers seek to replenish their landbank,’ she added.

For the whole of this year, the residential sector accounted for the lion’s share or half of the $5.9 billion total investment sales figure.

This was followed by the retail sector, with a 16 per cent share. The bulk of this figure was contributed by the $541.9 million transaction of Clementi Mall in November, which is also the biggest overall investment sale transaction this year, taking into account all sectors of the property market.

Among the over-$100 million apiece deals this year were the $248 million sale of Katong Mall, UOL Group’s $329 million purchase of a 99-year leasehold condo plot at Dakota Crescent at a state tender, and Overseas Union Enterprise’s sale of the former Parisian site at Angullia Park to China Sonangol Land for $283 million.