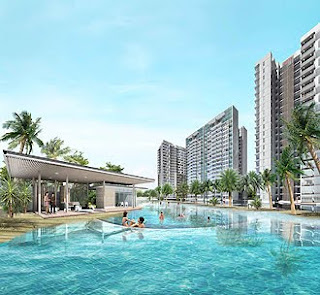 FLATS at Far East Organization's new project are being sold with a 103-year lease even though the project in Katong sits on freehold land.

The rare step means Far East will have to settle for lower prices for the units, but it will retain an interest in the site and reap further benefits when the neighbourhood is further transformed.

Sales at the 408-unit The Shore Residences, which is opposite Katong Shopping Centre, start on Friday, New Year's Day, but previews in recent weeks have already reaped contracts.

'The area has transformed and the pace of transformation is speeding up.'

An MRT station has been earmarked for nearby Marine Parade. There is also the Parkway Parade shopping centre, plenty of eating places in the area and the yet-to-be revamped Katong Mall.

Mr Chia also referred to the 'bigger picture' - Marina Bay, which will be only a 10-minute drive away.

While Far East cannot realise the full potential of the site now, by retaining the freehold title it will have the chance to participate eventually, he said.

Knight Frank chairman Tan Tiong Cheng told The Straits Times: 'Far East is a privately owned firm, so this move does allow the family to hold on to the site for the benefit of their future generations.'

Selling a lease term instead of the entire freehold tenure is relatively rare, although Far East has done it before.

It launched two cluster housing projects - Cabana and The Greenwood - on freehold land with 103-year leases.

The 119-unit Cabana is in Sunrise Terrace, near Yio Chu Kang MRT station, while the 54-unit The Greenwood is in Greenwood Avenue.

The 99-year leasehold Spring Grove condo, which sits on the former Grange Road residence of the American ambassador, is a similar case.

The United States government bought the land in 1950 on a freehold lease but sold it on a 99-year lease to City Developments in 1991. The plot reverts to the US government at the end of this century.

Not many developers are keen on the strategy for the simple reason that 99 years is a long wait and they would not be around to enjoy the fruits of their efforts, say property experts.

Far East could charge more for The Shore if it were sold as a freehold project but it is giving that premium up in exchange for the reversionary interest in the land, experts say.

Another expert said: 'There'll be en-bloc sale potential if the market is good but the trump card is held by Far East, instead of the Government.'

Far East can either grant a lease top-up, buy back the land, sell the freehold tenure or not act.

'When the owners want to do a collective sale in two or three decades' time, they will have to refer to the holder of the freehold title, which is Far East,' said Ngee Ann Polytechnic real estate lecturer Nicholas Mak.

'A lot will then depend on the top-up premium that Far East will ask for.'

The project's en-bloc potential is not an issue at the moment. Far East said it has sold 'more than 70 units' since it started previews about two weeks ago.

Prices for two-bedders, which are on higher floors, start from $1.1 million or $1,180 psf. The project also has three- and four-bedroom units. Prices will rise about 2 per cent at Friday's launch.

Mr Chia said the demand for the one- and two-bedders may be due to a lack of smaller flats in the area, as well as the rejuvenation of the Katong neighbourhood.