Market sentiment has improved; developers showing much greater appetite for state industrial land than they were last year

INTENSE bidding for state industrial sites in the past few months has market watchers paying close attention to the industrial government land sales (GLS) programme – all eyes are on whether the confirmed list could be brought back for the first half of next year.

‘There’s a possibility,’ says DTZ’s Southeast Asia research head Chua Chor Hoon, pointing to how the government reinstated the confirmed list for residential sites for first-half 2010 as developers bid aggressively for them recently.

The Ministry of Trade and Industry Ministry (MTI) suspended the confirmed list for the first half of 2009 as the global economy went into a tailspin. It kept the suspension for the second half to ‘provide flexibility for the market to adjust supply in accordance with the current economic conditions’. 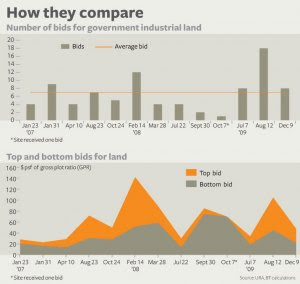 Sites on the confirmed list are launched for tender based on a schedule. On the other hand, sites on the reserve list are put up for sale only if interested parties submit applications for them, with minimum offers acceptable to the government.

As the year draws to close, MTI has yet to announce what the industrial GLS programme will be like for H1 2010. In the meantime, market sentiment has improved and developers are showing much greater appetite for state industrial land than they were last year.

The revived interest can be seen from the larger number of bids put in. A site at Woodlands Industrial Park E5/Woodlands Avenue 4 attracted eight bids when tender closed in July; one at Kaki Bukit Road 2 received 18 bids in August; and one at Pioneer Road North/Soon Lee Drive drew eight bids this month. In all three cases, the number of bids exceeded the average of seven in the 2007-2009 period.

In contrast, demand was weak for two sites put up for sale towards the end of last year – just as the financial crisis hit rock-bottom. A site at Ubi Avenue 4 drew two bids in September, and one at Kallang Pudding Road attracted just one bid in October.

There is also fiercer competition for land – the gap between the top and bottom bids had shrunk going into 2008, but widened again for the three sites triggered for sale this year. The highest bid for the site at Kaki Bukit Road 2 in August was more than twice that of the lowest.

Colliers International director (industrial) Tan Boon Leong hopes to see the confirmed list for industrial land brought back for H1 2010. He says interest in industrial sites has grown, not just because the economy seems to be recovering, but also because these plots require relatively smaller investment and development outlays compared with large residential or retail parcels.

His wish-list for the confirmed list includes more sites in mature industrial estates such as Changi and Lower Delta. There may not be empty plots left in those areas, but he suggests the government clear some sites and make them available for industrial use.