Considerable interest expected in two sites on H1 list; MTI to also replenish reserve list which will have one new site and seven brought over from 2009

The government will bring back the confirmed list for industrial land sales in H1 next year, providing further evidence of an economy on the mend. 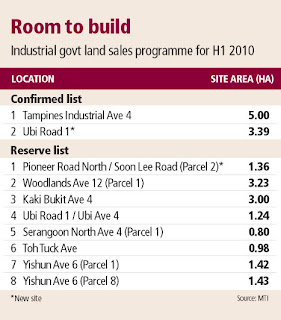 Market watchers have welcomed the move and expect to see considerable interest in sites on the upcoming list.

The Ministry of Trade and Industry (MTI) said yesterday that it will reinstate the confirmed list and replenish the reserve list ‘in view of the improved economic conditions, and to continue to meet demand for industrial land’.

The confirmed list will comprise two sites. One is a new 60-year leasehold parcel in Ubi Road 1, with a gross plot ratio of 2.5 and zoned for Business 1 development.

Details of this site could be released in June next year.

The other site, transferred from the H2 2009 reserve list, is in Tampines Industrial Ave 4. Details on the 30-year leasehold parcel could be out in March.

MTI launches sites on the confirmed list for tender based on a schedule. It suspended this arrangement for the whole of 2009 as the economy tanked and put a dampener on manufacturing.

Demand for state industrial land started showing up some time in May. Three sites on the reserve list have been triggered for sale this year and developers competed intensely for them, reflecting a shift in sentiment.

The keen bidding got some market observers wondering if the confirmed list would make a comeback in H1 next year – which it will.

Ngee Ann Polytechnic real estate lecturer Nicholas Mak said that there is a need ‘to prepare for medium-term demand’, as plots released next year will probably not be ready for occupation until after 2011.

Unlike sites on the confirmed list, those on the reserve list are put up for sale only if interested parties submit applications and undertake to bid a minimum amount acceptable to the government.

The upcoming reserve list will have eight sites. There is a new one at Pioneer Road North and Soon Lee Road, which has a 30-year lease and could be made available in May next year.

There are also seven others carried over from the H2 2009 reserve list, spread across areas such as Woodlands, Kaki Bukit and Yishun.

Market watchers believe that there will be demand for sites on the confirmed list, especially the one in Tampines Industrial Ave 4. Tampines is a growing industrial area and has attracted high value-added industries, said Mr Lim.

Colliers International director (Industrial) Tan Boon Leong notes that the parcels on the confirmed list happen to be two of the largest in the land sales programme – the Tampines site is 5 ha and the Ubi site 3.39 ha.

He suggests that the government could be testing the market’s reaction to large sites, given the strong interest that developers have shown in state industrial land in the past few months.