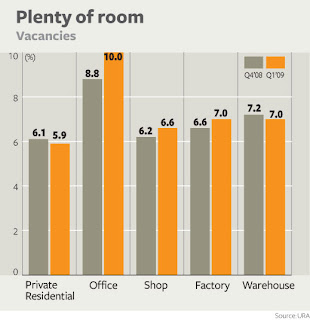 SINGAPORE'S property sector continues to take the bumpy slide down, with the office market gathering its share of bruises.
This segment took a hit for the second consecutive quarter, government data showed. The broader property market also saw prices and rentals slipping.

The take-up of office space fell nearly 323,000 sq ft in Q1 2009 after sliding 366,000 sq ft in Q4 last year.
That sent islandwide vacancies for offices up from 8.8 per cent at end-Q4 2008 to 10 per cent by end-Q1 2009 - the first time that Singapore is seeing double-digit office vacancies since late-2006.
CB Richard Ellis executive director (office services) Moray Armstrong reiterated the Singapore office market could see negative take-up for the whole of this year in excess of one million sq ft.
'The outlook for office rents remains bearish because of the negative take-up and the onset of greater supply from completion of new office developments,' he added.
CBRE expects office vacancies to rise sharply going forward. Rival firm Colliers International predicts that the average gross monthly rental of Grade A space in the central business district will ease by up to 30 per cent over the next three quarters of 2009 from the Q1 level - which was already 22 per cent lower than at the end of last year.
The weak demand in the office sector also rubbed off on business park space, which saw negative take-up of about 215,000 sq ft in Q1, against positive take-up of some 10,700 sq ft in Q4 2008. Vacancy rate for the sector increased from 6.2 per cent in Q4 2008 to 9.7 per cent in Q1 2009.
In the private residential segment, URA's overall islandwide price index slipped 14.1 per cent in Q1 over the preceding quarter, slightly steeper than the flash estimate decline of 13.8 per cent 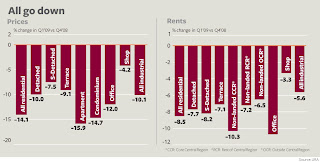 . The Q1 drop was also the biggest quarterly drop to date. The index has now eased 21.2 per cent since peaking in Q2 last year.
Colliers International director Tay Huey Ying says: 'Mass market homes could see more gradual price corrections averaging about 8 to 12 per cent over the next three quarters (from Q1 2009 levels) as more sellers in the secondary market as well as developers with unsold units from earlier launches can be expected to adjust the pricing of their properties to near-current levels.'
She predicts bigger average price declines of 10-15 per cent for the mid-tier and high-end/luxury segments over the same period.
URA's private residential rental indices show that the sharpest contraction in Q1 was for non-landed homes in the Core Central Region, which shrank 10.3 per cent quarter on quarter. The overall private residential rental index slipped 8.5 per cent in Q1, bigger than the 5.3 per cent drop in Q4. 'The decline in rents could be attributed to supply outstripping demand as more expats left the country and to more new projects being completed,' CBRE executive director Li Hiaw Ho said.
Developers sold a total 2,596 private homes in Q1, about six times the 419 units in Q4 2008.
The latest Q1 number was 64 units lower than the 2,660-unit figure collated from monthly developer sales stats (for January to March 2009). The decline reflects lapsing of options on units sold earlier in the quarter, URA's spokeswoman said.
Market watchers also observed a slight easing in residential supply.
Some 27,423 private homes are expected to be completed between Q2 2009 and 2011, lower than the 31,004 units projected for completion between 2009 and 2011 in URA's Q4 2008 data.
The smaller pipeline supply partly reflects the completion of 2,230 units in Q1 2009.
Developers may also have postponed redevelopment of some of the sites they had bought through en bloc sales and delayed construction, said URA's spokeswoman.
URA's shop rental index eased 3.3 per cent quarter on quarter in Q1, after dipping 0.6 per cent in Q4. The all industrial rental index slid 5.6 per cent in Q1, also worse than the 3.7 per cent fall in Q4.
Summing up prospects for Singapore's property markets, Knight Frank managing director Tan Tiong Cheng said: 'For the private residential sector, there's evidence of a pick-up in activity - not just in the primary market but also subsales and resales. For office and industrial, there are going to be more rental declines because of the economic slowdown. Retail will be difficult. New malls opening this year may drum up business, but it will be at the expense of existing malls, given that tourism numbers are weak.'
Source: Business Times, 25 April 2009
Posted by About Singapore Property