More can be done to boost energy efficiency 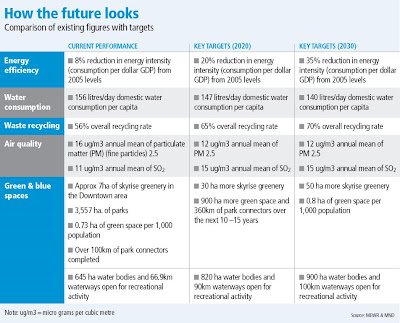 THE first-ever sustainable development blueprint launched by the Inter-ministerial Committee on Sustainable Development (IMCSD) won support from various quarters yesterday, but a few observers also felt that more could be done to push the green agenda.

The plan has outlined various programmes for Singapore's sustainable dev elopment and is 'a very good start to the whole process', said the Singapore Environment Council's executive director Howard Shaw. But he felt that it could have gone further to include caps on carbon emissions.

The blueprint set several goals in improving resource efficiency, such as a 35 per cent cut in energy consumption per dollar GDP from 2005 levels by 2030, but carbon emission caps were not part of them.

Environment and Water Resources Minister Yaacob Ibrahim, who is also co- chair of the IMCSD, shed some light on this at a media briefing yesterday. According to him, Singapore is constrained by the lack of alternative energy sources and the best strategy so far is to be resource-efficient.

'If you ask us whether we can really change our economic structure and replace all the fossil fuels that we import with alternative energy - not possible,' he said.

The plan has outlined various programmes for Singapore's sustainable development and is 'a very good start to the whole process', said the Singapore Environment Council's executive director Howard Shaw. But he felt it could have also included caps on carbon emissions.

There were also questions at the briefing on whether Singapore is spending enough on sustainable development. The government committed in this year's Budget $1 billion over the next five years to this area.

To this, National Development Minister and also IMCSD co-chair Mah Bow Tan highlighted that it was more important to invest in measures that will yield the best results. 'We are not throwing money at the problem . . . If the $1 billion gives us results and it starts to show, we will be going back to the Finance Ministry to ask for more.'

The blueprint also rolled out a mix of rules and incentives for buildings to become more energy-efficient. BT understands that the idea for one scheme - which offers bonus gross floor area for new private developments which attain the Green Mark platinum or gold plus rating - came from CapitaLand boss Liew Mun Leong at a BCA event last year.

City Developments managing director Kwek Leng Joo said: 'With the public sector taking the lead in raising the standard of greening our buildings by some mandatory requirements coupled with strategic incentives, developers and building owners are likely to respond positively.'
Mr Kwek also suggested that the government look into 'greening' the existing stock of around 1.2 million public and private housing units in Singapore.

Air quality also came to the IMCSD's attention and it has set caps on levels of sulphur dioxide and fine particles in the air. ExxonMobil's Singapore refinery manager Darrin Talley said that the company shares the government's desire for good air quality.