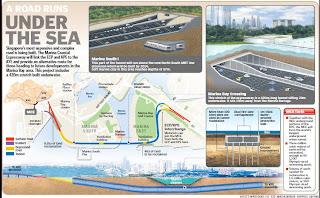 BEDOK Town Centre has changed little over the past 30 years, but that is all set to change when it opens its first mall in the third quarter of next year.

Frasers Centrepoint is developing the five-level mall of shops, eateries and entertainment outlets to compete with popular malls in Tampines and Pasir Ris.

Opening next month is Spageddies, an Italian casual dining restaurant, which is moving into the town centre to compete with fast-food stalwarts Kentucky Fried Chicken and McDonald's. A new karaoke lounge took up residence last month.

Bedok's younger crowd is excited by plans for the centre, which is currently a more popular hangout with the older residents. Student Bryce Tan, 16, who has lived near the centre all his life, hopes it will be the new 'heartland hangout''.

He said: 'Tampines still has more to offer than Bedok, but it is getting too crowded. Bedok is still closer to home, so it will be great if I can hang out here.'

The older folk are less effusive about the changes, but they welcome efforts to do something for the long-time shops there.

Madam May Liaw, 53, a retiree, said: 'Princess Cinema ceased operations late last year and the site is now occupied by a karaoke business. Progress is important, but you can't help feeling nostalgic sometimes.'

Since January, the Housing Board, East Coast Town Council and Bedok Town Centre Merchants Association have rolled out a scheme to renovate 163 shop units at the centre.

The shop owners are involved in a pilot project to protect themselves and their products from fire hazards.

Shop awnings made of composite metal will replace the existing fabric ones, which can catch fire easily.

Vertical blinds with heat sensors to protect goods displayed outside the shops from rain will also be installed. A first for Singapore, the blinds automatically roll up if a fire starts, which means walkways will not be blocked.

Shop owners will pay half of the costs - about $10,000 - while HDB and the town council will cover the remainder.

Other works-in-progress include a plaza area where residents can gather, a precinct marker, new drop-off areas, ramps, footpaths and linkways. In addition, nine blocks will get new lift shafts and lifts.

All works should be completed by the first quarter of next year. HDB said it will spend $9 million on the upgrading programmes.

With the works still ongoing, businesses have had to contend with slower sales.

A Straits Times check with 10 shops affected by the renovations revealed that business for them has dropped 20 to 30 per cent since the beginning of the year. To counter the drop, they have resorted to lucky draws and renovation sales.

'We don't want Bedok to be forgotten. We want people to know they can get everything they need at affordable prices in Bedok.'