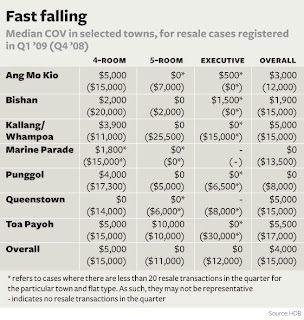 Median cash-over-valuation for resale transactions plunges 73% in Q1
BUYERS are increasingly reluctant to pay a premium for HDB flats, going by fast-falling cash-over-valuation (COV) figures from the Housing & Development Board yesterday. The median COV for resale transactions dived a stunning 73 per cent from $15,000 in Q4 2008 to $4,000 in Q1 2009.
MR MOHAMED'The sharp drop in COVs is due to increasing public resistance to paying above what are already higher valuations.'
In fact, the median COVs for five-room and executive flats were both zero dollars in Q1 2009. Just a quarter ago, buyers paid median cash amounts of $11,000 and $12,000 on top of valuation for five-room and executive flats respectively.
According to HDB, the proportion of flats that changed hands above valuation fell in Q1 2009 to 62 per cent of all resale transactions, from 85 per cent in Q4 2008.
ERA Asia-Pacific noted that more higher-value HDB resale flats are being sold below valuation - for $30,000 to $50,000 less in some cases. 'In coming quarters, we are likely to see more and more larger flats sold at or below valuation as the harsh economic conditions hit home,' said ERA associate director Eugene Lim.
Stricter loan-to-value ratios could have contributed to the trend. 'Banks are becoming more conservative and there have been cases where buyers are offered only 70 per cent loans instead of the usual 80 per cent,' Mr Lim said.
The cooling economy has also turned some home-seekers away from five-room to four-room flats, he noted. And as a result, prices of larger flats may face downward pressure.
On the whole, HDB's resale price index slid 0.8 per cent in Q1 2009 from Q4 2008, shrinking more than the flash estimate of minus 0.6 per cent released early this month. This is the first time the index has shrunk after growing more than 30 per cent over nine straight quarters.
Property consultants expect resale HDB flat prices to drop 5-10 per cent for the whole year, with larger flats accounting for more of the fall.
Nevertheless, 'we do not expect the decrease in HDB resale prices to dent upgrader demand for private property, because the rate of price fall of HDB resale flats is still smaller than that of private homes,' said Knight Frank's director of consultancy & research Nicholas Mak.
Three to four-room flats should enjoy greater demand, consultants reckon. As PropNex's Mr Mohamed observed, buyers are still willing to pay COV for these flats.
HDB data also shows a rising proportion of resale flat applications involving smaller flats.
Three- and four-room flats accounted for 69.8 per cent of applications in Q1 2009, compared with 67 per cent in Q4 2008.
There were 6,446 resale transactions in Q1 2009, 4.2 per cent more than in the preceding quarter. 'HDB resale transactions typically increase when times are bad,' said ERA's Mr Lim.
But with HDB building more new flats, some demand may shift, he added.
HDB said yesterday that it plans to launch another 2,400 build-to-order flats over the next six months, of which about 1,000 will be three-room and smaller flats.
Source: Business Times, 25 April 2009
Posted by About Singapore Property