Marina Bay sucks in $22b of investments 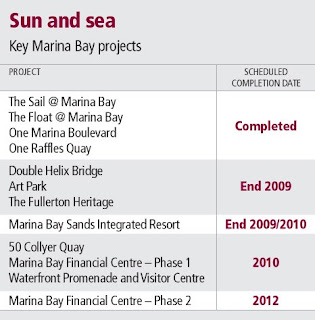 More sites are available in the area but govt is in no hurry to release them
(SINGAPORE) Marina Bay has attracted investments of more than $22 billion and while the area still has sites for development, the government has no plans to sell them at the moment.
'We are in no hurry to release these sites,' said National Development Minister Mah Bow Tan yesterday. He was speaking to the media after a tour of several projects taking shape along Marina Bay, such as the Marina Bay Sands integrated resort, the double helix bridge and the Fullerton heritage area.
According to Mr Mah, some investors are looking at specific sites and have approached the government, but 'we will pause for a while', he said.
Of the 360 ha of land set aside for Marina Bay's development, around 24 ha have been sold, the Urban Redevelopment Authority (URA) said.
The agency has not put up any more sites at Marina Bay for sale through the Government Land Sales Programme. The timing and number of sites to be released 'will depend on the economic conditions and market demand and subject to more detailed planning later on,' URA added.
For now, 'the timing is not right,' Mr Mah explained. 'We also want to be sure that the infrastructure is in place and the other developments are up. Then we'll see what else we want to have that will add to the attractiveness of the bay.'
Of the more than $22 billion pumped into Marina Bay's development, close to $5.7 billion was the government's investment in infrastructure. Another $16.5 billion came from private investors both in Singapore and abroad.
The US$4.5 billion Marina Bay Sands integrated resort is one of the most significant projects in the area. In 2006, the consortium behind the Marina Bay Financial Centre (MBFC) also said that they would spend $2 billion on the first phase of the development.
Over the next 10 to 15 years, the government will continue to pump more than $1 billion into infrastructural works to support Marina Bay's growth and to enhance connectivity within the city.
'What we have seen today shows that the progress of Marina Bay is very much on schedule and on track,' Mr Mah noted.
One important project is the construction of the double helix bridge, which will allow pedestrians to cross from Marina Centre to the Marina Bay Sands Integrated Resort in just three to four minutes when it is completed at the end of the year. The bridge, together with an adjacent vehicular bridge and the nearby art park, cost $82.9 million.
The double helix bridge will be part of a 3.5 km long waterfront loop linking key developments along Marina Bay, such as the upcoming MBFC and 50 Collyer Quay. 'In one or two years' time, this bay will be alive with people and activities,' Mr Mah said.
There will also be an extensive underground pedestrian network linked to MRT stations and retail shops. Phase one of MBFC for instance, will have around 93,000 sq ft of retail space both above and below ground level.
MBFC manager Raffles Quay Asset Management may start marketing the retail mall in H2 2009. 'The exact timing depends on how best we could finalise our plans once all the necessary authorities' approvals are in place as well as market conditions,' said its general manager Wilson Kwong.
As for the MBFC, space across its three towers is 61 per cent pre-committed.
'Given the uncertainty and business volatility, it is inevitable and understandable that interested prospects would take a longer time before making any long-term pre-commitments,' Mr Kwong said. Nevertheless, MBFC still receives a 'healthy level' of leasing enquiries.
According to property consultant Cushman & Wakefield, 1.97 million sq ft of new office space could come onstream this year even as the property market softens. But Mr Mah was not unduly worried by such numbers.
'While we need to be mindful of the current economic downturn . . . we must also not forget that we have to prepare ourselves for when the economy recovers,' he said. 'When it does, we will be ready.'
Source: Business Times, 22 April 2009
Posted by About Singapore Property