Remaking goes on in good times and bad 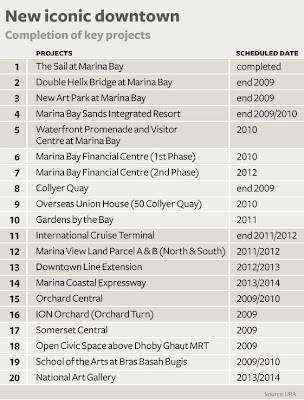 THE Urban Redevelopment Authority (URA) will begin this year a new round of reviews for Concept Plan 2011, a blueprint that maps out the long-term vision for Singapore's physical development.
URA's review, which will be done with various ministries and government agencies, will examine Singapore's land use and infrastructure needs to cater to an increased population and also the changing profile of its resident population and economy.
The Concept Plan review's 'ultimate aim must be to ensure that we will continue to have a good quality living environment in Singapore, one that will take into account the needs of not just the young, but also of the old, and a growing population which will consist of people from many, many different parts of the world', said National Development Minister Mah Bow Tan.
As part of Concept Plan 2011, URA will also actively seek views from the public, Mr Mah said in his keynote speech at the URA Corporate Plan Seminar yesterday.
He also highlighted that one of Singapore's key strengths is its long-term integrated planning approach. 'Few cities in the world have a holistic planning framework like ours . . . ,' Mr Mah said. He cited a case in point. Despite the dismal economic climate when URA started planning the development and infrastructure for Marina Bay, just before the start of the last downturn in 2000, the government remained focused on building up Marina Bay. 'And because we planned ahead, we were able to attract foreign investments into the Bay when the economy started to pick up and then when it boomed,' Mr Mah said.

He also also stressed that efforts to remake Singapore must continue in both good and bad times if the island is to be a key node in the network of global cities. It was as a result of forward planning, and effective and consistent implementation that a new Singapore city is taking shape fast. He painted a picture of the 'new iconic signature skyline' emerging at Marina Bay. The double helix bridge, Art Park, Gardens by the Bay and new waterfront promenade will be progressively completed by 2011. Then, there are the Marina Bay Sands Integrated Resort and the first phase of Marina Bay Financial Centre which will be operational by 2010. The government has invested nearly $5.7 billion in infrastructure works in Marina Bay so far and will continue to pump in more money to support its future growth and boost connectivity with the existing city, Mr Mah added.
The prime Orchard Road shopping belt is also being rejuvenated with new malls. Singapore will have a new generation of regional commercial districts, such as Jurong Lake District. And the island will become an even more exciting playground with a wider range of leisure and recreational options. Singapore's park connector network will be tripled to 300 km over the next five to 10 years, joining up into a continuous loop around the island. URA is also developing scenic walks along Singapore's coastline.
The Ministry of National Development and URA will be launching a programme called 'My New Singapore' to encourage Singaporeans to rediscover Singapore.
'The programme will comprise a series of events and activities which will reach out to Singaporeans. We invite everybody to see the new developments and visit new leisure destinations. We will show Singaporeans the plans that we have for their neighbourhoods, bring them to see the new Marina Bay, let them enjoy the parks and park connectors. And I hope that when Singaporeans rediscover Singapore, they will realise what a special little city we have, and perhaps, we will love our city even more,' Mr Mah said.
He even suggested Singaporeans may want to shop, eat and sightsee in Singapore. 'Perhaps during this downturn, it is timely for Singaporeans to take time to get to know our city better. Enjoy what we have to offer here in Singapore, and maybe save a little bit of money at the same time.'
URA will hold the 'My Endearing Home' roving exhibition at major malls between May and August this year to present Singaporeans a chance to learn about plans for their immediate neighbourhoods and for the city, and 'discover that there is much to treasure on our island'.
A Marina Bay Festival will be held in the later part of 2010 that will showcase the waterfront promenade and new developments to both locals and foreign visitors.
NParks will also press on with its efforts to green Singapore and conserve the island's natural heritage.