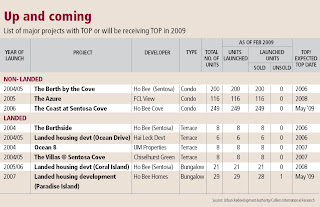 Fewer than 1,000 homes at Sentosa Cove are likely to be completed by end of 2009; several developers are delaying their projects further
(SINGAPORE) It was supposed to be Asia's answer to glitzy Monaco, but plans to remake Sentosa into an island playground where rich foreigners and locals live and play are going to take longer than expected to materialise.

While key hotel projects and the Resorts World at Sentosa integrated resort are largely on schedule, things are not going as well at Sentosa Cove, the stretch of land on the island set aside for mainly residential use.
The plan was for some 2,500 oceanfront villas, waterway bungalows, hillside mansions and upscale condominiums to be built on the 117-hectare site. Earlier projections were that the bulk of the new homes would be ready by 2010.
But industry sources now say fewer than 1,000 homes are likely to be completed by the end of this year, and several developers are expected to delay their projects further.
City Developments, for example, has postponed its $580 million project comprising luxury apartments, shops and a five-star, 320-room Westin Hotel, originally slated to open this year.
One problem is that sales and prices of new homes on the island have dropped sharply in the last two quarters, exacerbated by the number of foreigners leaving Singapore.
Sentosa Cove was popular with foreigners as they could get permission to own land there with relative ease.
'The bulk of purchasers of luxury homes, both on the mainland and on Sentosa, were foreigners,' said Tay Huey Ying, director for research and advisory at Colliers International.
Colliers' data, based on caveats lodged, shows that only one non-landed residential unit in Sentosa was sold in Q4 2008. In the first three months of this year, the number rose slightly to eight.
This is a far cry from transaction volumes at the height of the property boom in 2007. In Q1 2007, some 279 non-landed homes were sold in Sentosa. In Q2 that year, the transaction volume was 243.
Prices have also come down. Colliers' data shows that the transacted price of non-landed properties at Sentosa Cove averaged $1,318 per square foot (psf) in Q1 2009 - down 45.8 per cent from the peak average of $2,431 psf recorded exactly one year ago in Q1 2008.
It should be noted, however, that these averages are based on small transaction volumes of eight units for Q1 2009, and 33 units for Q1 2008.
Occupancy levels are low too. Even for properties that are completed and fully sold, not every unit is occupied, said Nicholas Mak, director of research and consultancy at Knight Frank. At the fully sold
The Berth by the Cove, which obtained its temporary occupation permit in 2006, occupancy is at 93-94 per cent, but market watchers say islandwide, the occupancy levels are much lower.
The picture is, however, somewhat brighter for other new and upcoming developments on the island.
Luxury hotel Capella Singapore, which opened its doors last week, is seeing strong demand - despite the fact that room rates start at $750. 'Response in our first week has been very positive, with an average of about 70 rooms per night,' revealed general manager Michael Luible. The hotel has 111 rooms.
Mr Luible acknowledged that the hotel would not escape the effects of the economic slowdown, but pointed out that its guests are high net worth individuals who will continue to travel. 'We will, of course, monitor the economic situation carefully and plan our strategies accordingly,' he added.
Resorts World at Sentosa remains on-track for its soft opening, which will see Universal Studios, four of its six hotels as well as the casino ready in Q1 2010.
The four hotels - Hotel Michael, Maxims Tower, Festive Hotel and Hard Rock Hotel - will add about 1,350 rooms to Singapore's inventory. The rest of the resort, which includes a spa and Maritime Museum, will open progressively thereafter.
Indeed, hopes are now pinned on the integrated resort which is designed to draw in visitors.
According to Suzanne Ho, deputy director of communications for Sentosa, foreign visitor arrivals have dipped since last September, in line with the downward trend of tourist arrivals into Singapore.
The lower visitor numbers are affecting food and beverage operators adversely. Ken Hasegawa, manager of Japanese restaurant Si Bon, reckoned that revenue has fallen by about 20 per cent recently.
Similarly, at Cool Deck, a bar along Siloso Beach, business is slow. Selina Huang, Cool Deck's assistant manager, attributed the decrease to falling tourist arrivals. Just three months ago, close to 90 per cent of the bar's clientele were tourists, most of whom stayed at the Rasa Sentosa Hotel. Now, only 40 per cent of patrons are tourists, she noted.
The decrease in demand is prompting some outlets to modify their pricing. Even il Lido Italian Restaurant has cut prices by about 20 per cent on average in response to a 40 to 50 per cent decrease in revenue over the past three months. Its seven-course meal now costs $120 instead of $180, and it has removed some expensive items - such as truffles and caviar - from the menu.
Source: Business Times, 6 April 2009
Posted by About Singapore Property