HDB upgraders on the move 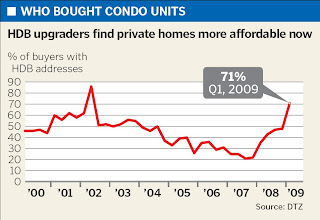 SEVEN in 10 buyers of new private homes in the first three months of the year had Housing Board addresses, making HDB upgraders the hottest group in the property market so far for this year.
This is the second-highest proportion of HDB upgraders since the earliest available data in 1995, according to property consultancy DTZ's preliminary analysis of caveats lodged in the first quarter.
The record was 86 per cent, in the second quarter of 2002.
HDB upgraders refer to better-off residents of larger flats looking to move up the property ladder.
They typically buy into 'mass market' private developments - lower-priced condominiums in the suburbs, and preferably in the same town or region where they live.
In normal times, HDB upgraders account for between 20 and 50 per cent of new home buyers, DTZ said.
But experts reckon their numbers are now swelling during a rare 'window period' when the price gap between private homes and HDB resale flats is narrowing.
Supply has also played a key part in the surging interest, with mass market projects forming the bulk of recent launches, said DTZ's senior director for research Chua Chor Hoon.
Property consultancy CB Richard Ellis thinks many HDB upgraders held back from buying during the recent property boom, particularly as prices skyrocketed in 2006 and 2007.
There were few 'mass market' condo launches then, as developers rushed to build high-end homes and investors scooped them up.
But now, private property prices are falling sharply at a time when HDB resale flat prices are still holding steady.
Official data shows that while fourth quarter private home prices fell 6.1 per cent, HDB resale prices actually rose 1.4 per cent.
So HDB upgraders are now keen to sell their flats and upgrade to bigger units at reasonable prices.
For example, a HDB five-room flat in Queenstown can still sell for around $600,000.
At recent property launches, suburban condo units were going for around $600 psf. This means a 1,200 sq ft three-bedroom private condo apartment costs $720,000.
At Mi Casa in Choa Chu Kang, upgraders accounted for 80 per cent of its 97 buyers so far. They also bought many units at The Caspian, beside Lakeside MRT station, Double Bay Residences in Simei and The Quartz in Buangkok.
Corporate communications and marketing manager Adam Tan and his wife Ng Bee Kay are among the HDB upgraders.
'We looked at some properties in October but the prices were still a bit high. Then, my wife got pregnant in late November. So from January onwards, we started to search for a bigger place - with a vengeance,' said Mr Tan, 32.
The family will be moving from their four-room flat in Bedok into a $760,000, 1,195 sq ft unit at Astoria Park, next to Kembangan MRT station.
To attract buyers, developers of some ongoing launches slashed prices in the first quarter. The average price at Waterfront Waves in Bedok was reduced from $800 psf to $600 psf, while at Kovan Residences near Kovan MRT station, prices were cut from $880 psf to $750 psf.
Experts expect the gap between private homes and HDB resale flats to continue narrowing this year, which means this is likely to be a strong year for the HDB upgraders segment.
Unlike the previous downturn in 1996, HDB prices are less likely this time around to fall quickly in tandem with private property prices.
One reason is that the supply of new HDB flats is more limited now.
'Previously, HDB built public flats ahead of demand,' noted DTZ's Ms Chua. But it now builds only when there is demand via its build-to-order system.
With relaxed eligibility rules, there are also more buyers in the HDB resale market, including permanent residents and singles.
If current trends continue, the experts say, HDB resale prices should eventually fall by the end of the year in line with the bigger fall in private home prices.
Source: Straits Times, 1 Apr 2009
Posted by About Singapore Property