DESPITE prices soaring in the third quarter, speculative activity in the private housing market fell in the period to its lowest level in two years.

The number of sub-sale transactions – a closely watched measure of speculation – dropped by almost 20 per cent in the third quarter compared with the previous quarter, according to Urban Redevelopment Authority (URA) data yesterday.

As a proportion of total sales, sub-sales also fell to their lowest level since 2007. Only 9 per cent of home sales in the third quarter were sub-sales, compared to 13 per cent in the second quarter and over 16 per cent last year. 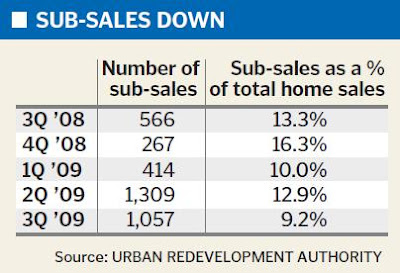 Sub-sales occur when a buyer purchases a new home and then quickly resells it before it is built. These transactions are the most widely used proxy of property speculation as the original buyer does not hold on to his unit long enough to stay in it or rent it out.

One of the reasons sub-sales dropped in the third quarter could have been the measures introduced by the Government to cool the exuberance in the market, said property consultants.

Although the measures were only officially announced on Sept 14, towards the end of the quarter, the Government had indicated well before that it was going to intervene in the market.

They fell across the whole market in the third quarter, indicating that home sales in the quarter were largely fuelled by genuine home demand.

Now that the Government has intervened, overall sub-sale levels are likely to stay low, at between 5 to 10 per cent of total sales, said Mr Mak.