Rents in decline for the fifth consecutive quarter, down 2.2% in July-Sept

PRIVATE home prices shot up 15.8 per cent in the third quarter, confirming the spectacular jump in the housing market flagged by earlier estimates.

But the massive surge in home prices – the largest in 28 years – has not been matched by a corresponding leap in rents. 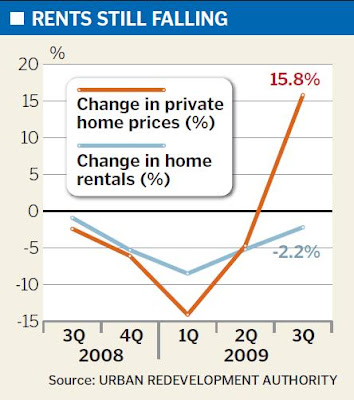 Rents of private homes continued their decline for the fifth quarter in a row, falling by 2.2 per cent in the third quarter, according to Urban Redevelopment Authority (URA) figures released yesterday.

Since the beginning of the year, private home rents have fallen 15.2 per cent. Prices are down only about 5 per cent for the year, after the third-quarter surge reversed four previous quarters of decline.

While this could be a sign that the boom in the housing market is not being supported by fundamentals, property consultants are not worried just yet.

This is because prices are now being boosted by sales of brand-new homes, which will not be completed for a few years, said Ms Tay Huey Ying, director of research and advisory at Colliers International.

By that time, the economy is likely to have recovered and businesses will have rehired more expatriates, who are the main tenants of private homes here.

In any case, the decline in private home rents has eased considerably and is on the verge of turning, she said. Colliers’ research shows that rents of luxury homes already rose by 3.3 per cent in the third quarter.

They also bought 4,883 homes from resale market sellers, 17 per cent more than in the second quarter.

But this buying momentum is likely to slow for the rest of the year, said Ms Tay. Home sales in the fourth quarter are generally lower owing to school holidays and the festive season, and this year, sentiment will be further dampened by the Government’s recent cooling measures.

As it is, the moves have already had some impact on the market, said Mr Donald Han, managing director of property consultancy Cushman & Wakefield.

He noted that yesterday’s official figures on home prices came in slightly lower than the Government’s estimate earlier this month of a 15.9 per cent rise.

The estimate takes into account all transactions in the third quarter except for those in the last two weeks – exactly the period after the Government announced its cooling measures on Sept 14.

‘The highest price increases probably took place in the first half of the third quarter,’ said Mr Han.

The cooling measures appear to have had the biggest effect on homes in the central districts and city-fringe areas.

The URA said yesterday that prices of prime city-centre homes rose 15.2 per cent in the third quarter – down from the 16.2 per cent it had earlier estimated.

Similarly, city-fringe home prices rose 18.5 per cent, according to yesterday’s data, which is lower than the 19.1 per cent in the estimates.

Suburban homes were the only ones that rose in price more than estimated: 16.1 per cent, compared to the estimate of 15.4 per cent.

Apart from private homes, other segments of the property market stayed in negative territory in the third quarter, although they registered smaller declines.