Home sales: Boom with a difference

PROPERTY developers here appear set to sell at least as many new homes this year as in the record year of 2007.

But the total value of these new private homes is on track to be only about half of that two years ago, underlining how different the two property booms have been. 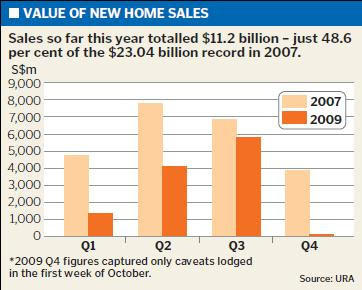 This shift is partly thanks to a dramatic rise in sales of smaller, mass market units, says a new analysis by CBRE Research.

The running total for units sold in the first three quarters of this year is 12,828 compared to 2007’s 14,811 – so even average sales for the final three months will take this year’s total close to that of 2007.

The total value of new homes sold two years ago was $23.04 billion, based on caveats lodged. In comparison, the total from January to the first week of October this year was $11.2 billion – just 48.6 per cent of 2007’s record.

This is because back in 2007, the luxury end of the residential market achieved top-line record prices with units that were usually large in size, said CBRE Research executive director Li Hiaw Ho.

‘Unit sizes were often greater than 2,000 sq ft,’ he said, adding that much of the demand came from the luxury segment where overall prices were high.

This year, mass market homes positioned to attract HDB upgraders accounted for most of the demand, Mr Li pointed out. In addition, the proliferation of smaller homes of less than 500 sq ft – which have a lower total price – also helped to bring down the overall value.

Developers were keen to ensure affordability this year as they scrambled to reconfigure their unit sizes to allow for smaller apartments.

‘Our high-end market has not started to move. It’s the reverse of Hong Kong, where the property market picked up with the high-end segment,’ said Mr Donald Han, managing director of Cushman & Wakefield. ‘Luxury prices are generally 25 per cent below the peak of the market in the first quarter of 2008.’

Another key difference between the previous boom year and this year is the number of foreigners buying into Singapore’s private housing market, said CBRE Research.

Two years ago, about 1,736 foreigners bought new homes in the primary market. A fair number were speculators who were not based here but were attracted to the Singapore growth story and the gains to be made in real estate.

‘Developers were doing a lot of road shows overseas then. We had buyers from Europe, Japan looking at huge penthouses, and the funds were buying,’ said Mr Han.

Knight Frank executive director (residential) Peter Ow said that for much of this year, prices have been generally lower, which was why many buyers jumped in to buy.

‘The market in 2007 was also more speculative. In the first half-year of 2009, buyers were mostly owner-occupiers.’

Although some speculators have returned to the market since then, this year’s market is generally a lot more stable compared with 2007’s, said Mr Ow.

Price rises earlier in the year were fast and furious but the increases cooled somewhat after the Government’s market-calming measures were introduced in mid-September, said Mr Ow.

Some new private home prices are now high enough to cause buyers to think twice, he said.

The breather is thus good as buyers need time to accept current prices and the fact that the low prices of the earlier part of this year are likely gone forever, he said.

‘Developers are not in a hurry to launch in view of rising land prices. There isn’t a lot of supply coming up. While the land sales programme will have more land, it will take time for it to roll out,’ said Mr Ow.