BUSY worker bees at Raffles Place will have a new hive to fill from next year with the opening of a link mall at the upcoming Marina Bay Financial Centre. 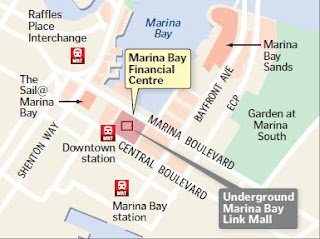 The Marina Bay Link Mall will feature upmarket tenants catering to the estimated 62,000 professionals working or living in the area.

It will also connect the future Downtown MRT station to neighbouring buildings such as The Sail residential complex and the Marina Bay Sands integrated resort.

The property's managing company, Raffles Quay Asset Management (RQAM), said yesterday that the mall will also have some shops above ground, a waterfront plaza, a park for events and a restaurant perched on the 33rd floor of the financial centre.

With 217,000 sq ft of gross floor area, the mall's size will be comparable to that of suburban shopping centres.

More than half of its lettable space has already been snapped up.

Its stores are likely to carry luxury brands which may also appeal to the mass market, said Ms Rose Tong, RQAM's head of marketing (retail). She was unable to disclose any confirmed retail tenants as yet.

She stressed that the mall was not planning to compete with the neighbouring Marina Bay Sands, as they have different target markets.

The integrated resort's mall will have nearly five times more retail space, featuring luxury tenants such as Chanel and Gucci to attract wealthy shoppers and tourists.

Construction of the $4 billion Marina Bay Financial Centre, which comprises three office towers, two residential towers and the mall, is on track.

The first phase will be completed by the middle of next year, while the mall will open in the last quarter of that year, once offices and residents move in.

Mr Danny Yeo, managing director at Knight Frank, noted that the property will increase Raffles Place's dining and shopping offerings by 50 per cent - and there will be appetite.

'Young executives are eating out more and there are more expats too. There is not enough variety of options in the area, so there is room for many players,' he said.

The mall is part of a network of retail spaces around the bay due to open soon.

Places like The Sail, Customs House and the Fullerton Bay Hotel at Clifford Pier will also offer entertainment options.

Their openings, timed within the next few years, will coincide with a full recovery in the economy and more tourists coming here, said Mr Donald Han, managing director of real estate company Cushman & Wakefield.

'In the next two years, we'll see a different Singapore with a concentration of attractions at Marina Bay. The casino will not only attract tourists but also weekend crowds to the area,' he said.

'In the next two years, we'll see a different Singapore with a concentration of attractions at Marina Bay. The casino will not only attract tourists but also weekend crowds to the area.'