In dollar terms, ‘09 home sales pale before record of ‘07

Volumes may be as high, but units sold this year are smaller and less expensive

Numbers tell only half the story. While developers are heading towards the record number of private homes sold in 2007, CB Richard Ellis says that the total transaction value of primary market sales in 2009 so far – at about $11.2 billion – is only about half the $23 billion worth of new homes sold in the peak year of 2007. 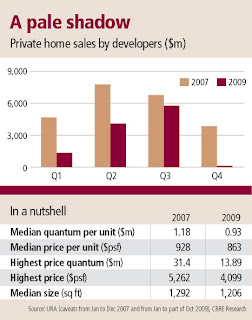 The smaller value of total private homes sold by developers this year reflects the fact that mass-market homes have hogged the limelight this year, unlike 2007, when the spotlight was on the luxury market.

Median prices per unit transacted, both in absolute dollar as well as per square foot terms, have also been lower this year compared with 2007. With the focus on small-format units to move sales, the median size of units sold so far this year is also smaller than in 2007.

CBRE based its analysis on caveats data captured up to Oct 27 in Urban Redevelopment Authority’s Realis system.

This year, the strongest quarterly showing was in Q3, when developers sold about $5.8 billion worth of private homes, up from $1.36 billion in Q1 and $4.05 billion in Q2.

This pick-up has much to do with the stages of recovery in home buying.

‘The buying momentum started in the mass market in the first quarter before filtering to the mid segment in Q2. It was only in Q3 that developers started rolling out their higher-priced projects – not just in the Core Central Region but in the suburbs,’ notes Knight Frank executive director Peter Ow.

DTZ executive director Ong Choon Fah reckons the total value of homes sold by developers is likely to slow again in the current quarter, due to a seasonal effect of the year-end holiday period combined with a quieter market after the government’s cooling measures last month.

Agreeing, Mr Ow says: ‘Developers are also likely to hold off launching projects for the rest of this year, in the hope of getting higher prices again in 2010, when the opening of the two integrated resorts is expected to create another wave of activity in the market.’

The most expensive private home in the primary market sold this year was a third-floor apartment at Seven Palms Sentosa Cove which fetched $13.89 million.

In 2007, the priciest sale was that of a 19th-floor unit at The Marq On Paterson Hill which sold for $31.40 million. Both projects are by SC Global.

However, this is not the record price. That was set in October 2007 when the developer of The Orchard Residences sold a 53rd-level penthouse for $5,600 psf – although a caveat does not appear to have been lodged for this transaction.

Another finding from CBRE’s analysis is a reduction in median size of units sold by developers from 1,292 sq ft in full-year 2007 to 1,206 sq ft this year.

The Urban Redevelopment Authority’s survey of developers shows they sold 12,828 private homes in the first nine months of 2009. This means they will have to sell 1,983 units in the current quarter to match 2007’s full-year record of 14,811 units.

‘The current good performance of 2009, a recession year no less, does not show the same characteristics of the previous residential boom of 2007,’ observed CBRE executive director Li Hiaw Ho.

‘In 2007, the luxury end of the residential market achieved top-line record prices with units that were more often than not large in size. Unit sizes were often greater than 2,000 sq ft. Much of the demand came from the luxury segment where the overall price quantums were high,’ he noted.

In contrast, much of 2009’s demand has been for mass-market homes positioned for HDB upgraders. ‘The proliferation of small-format homes of less than 500 square feet has also led to relatively lower price quantums, compared with that of 2007,’ Mr Li noted.

Another difference between the years 2007 and 2009 is a drop in the number of foreign buyers.