Rise in non-resident population to moderate 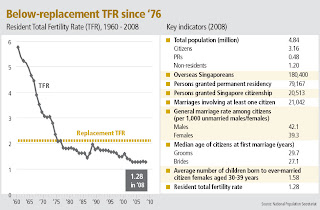 THE number of foreigners entering Singapore is likely to moderate in the coming months because of the economic downturn.
This is according to the National Population Secretariat (NPS), which also released figures at a press briefing yesterday pointing to lower marriage and birth rates in Singapore.
As at June last year, Singapore's total population grew by a record 5.5 per cent year-on-year to 4.84 million. The increase in the number of non-residents - by 19 per cent to 1.2 million - was largely behind the growth.
But most non-residents come to Singapore for work, the NPS said. The 2009 Population in Brief handbook noted: 'Amid the current economic recession, we can expect the increase in the non-resident population to be moderated'.
While the absolute number of marriages involving at least one Singapore citizen increased by 1.3 per cent from 2007 to 21,042 in 2008, general marriage rates over the longer-term had fallen.
For instance, for every 1,000 unmarried men, there were 47.9 married men in 1998, but 42.1 in 2008. And for every 1,000 unmarried women, there were 49 married women in 1998, but 39.3 in 2008.
People are also marrying later. Over the last decade, the median age at first marriage rose from 28.3 to 29.7 years for men, and from 25.7 to 27.1 years for women.
And married couples are having fewer children. The average number of children born to 'ever-married' citizen females aged 30-39 years fell from 1.74 in 1998 to 1.58 in 2008.
Unsurprisingly, the lack of enthusiasm for marriage and parenthood meant that Singapore's total fertility rate stayed weak. It was 1.28 in 2008, down slightly from 1.29 in 2007.
Meanwhile, the proportion of residents aged 65 and above rose from 6.8 per cent in 1998 to 8.7 per cent in 2008.
Singapore's population challenge is a 'long-term issue', said NPS director Quah Ley Hoon.
'We will need to continue to encourage marriage and parenthood, engage overseas Singaporeans, as well as facilitate the naturalisation and integration of suitable foreigners.'
The government had enhanced the marriage and parenthood package last year and NPS said that it is still too early to gauge its effectiveness.
Nevertheless, it noted that take-up rates for several measures in the package have increased.
Source: Business Times, 18 June 2009
Posted by About Singapore Property