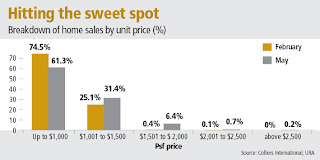 Developers sold year-high 1,668 units in May amid discounts and improved sentiment
(SINGAPORE) The buds of recovery sprouting in the private home market since February seem to have blossomed in May.
Developer sales for the month hit 1,668 units - a record for the year and 37 per cent more than the 1,214 in April. More transactions also occurred in the high-end sector at prices above $2,000 per square foot (psf).
However, some industry watchers continue to warn that the blooms may not last unless the economy improves decisively. They also remain concerned about weak rental demand and more residential supply coming on stream.
According to data from the Urban Redevelopment Authority (URA) yesterday, developer sales in May put on their strongest showing not just since January, but also since the sub-prime crisis began to rear its head. The 1,668 units sold last month were just 3 per cent shy of the last high of 1,723 units in August 2007.
'The stockmarket rally which began in mid-March has resulted in positive sentiment that has driven private residential home sales,' said CBRE Research executive director Li Hiaw Ho. Other consultants noted that lower home prices and immense liquidity searching for higher returns also kept home sales up.
In another sign that sentiment had improved, buying activity continued to return to the high-end core central region (CCR) in May. The launch of 32 units at Rochelle at Newton, for instance, was fully taken up.
Of the 1,668 units sold in May, 617 units or 37 per cent were from CCR. Colliers International pointed out that this proportion far exceeded the much lower 8 per cent seen in February.
Jones Lang LaSalle attributed the higher CCR sales to 'discounted pricing from developers', as seen in several projects such as Martin Place Residences, The Wharf Residence and Parc Centennial. At Martin Place Residences, for instance, units were first sold at a median price of $1,746 psf in January 2008. Last month, buyers took up 186 units at a median $1,423 psf.
Not only have sales increased in the high-end property market, more deals struck above $2,000 psf have emerged. According to Colliers, 14 units in May changed hands above that price level, compared with just one in February.
Notably, two apartments at The Orchard Residences went for $2,787 psf and $3,299 psf each last month. Other properties which saw median transaction prices of over $2,000 psf include Boulevard Vue, The Orange Grove, St Regis Residences and Vida.
The mid-market property sector also registered encouraging sales. Colliers noted that some 37 per cent, or 609 units of the 1,668 sold in May came from the rest of central region (RCR); the corresponding proportion in February was 29 per cent.
RCR saw the launch of the 26-unit Spring @ Langsat last month, of which nine units were taken up. Projects such as The Arte and The Mezzo continued to sell well.
Rosy sales aside, some buyers have returned units between April and May. URA data indicates, for instance, a return of 11 units at Mi Casa, three units at Verdure and three units at The Arte.
There are also industry watchers who remain guarded about the recent surge in home sales. This is 'largely fuelled by softer prices and strong latent demand, which alone will not be sufficient to sustain an overall recovery in the market', said Jones Lang LaSalle associate director of research
Desmond Sim.
'Unless there are improvements in the overall economy, it may still take quite some time before we see the return of 'super-luxury launches' . . . Affordability still remains the main factor to entice buyers.'
Citi and Nomura Singapore also said in research reports last week that the property upswing may not be sustainable. Nomura, in particular, expects to see a W-shaped recovery in asset prices because downside risks such as rising unemployment, falling rents and rising supply still exist.
Colliers deputy managing director Grace Ng noted that the Singapore market is 'a bit peculiar' because buying is largely spurred by sentiment; many people 'actually come into the market because they see other people buying . . . rather than calculating yields'.
Even then, rental yields today are likely to be higher than what bank deposits can offer, she added.
Source: Business Times, 16 June 2009
Posted by About Singapore Property