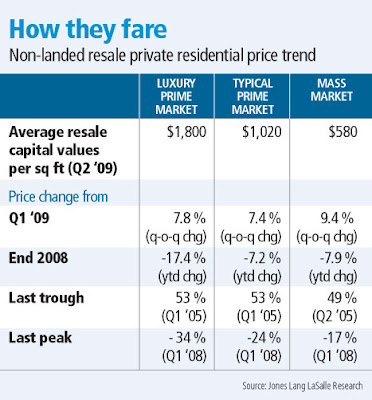 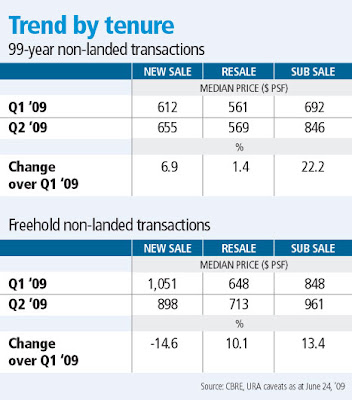 THE buying frenzy at property launches has spread to the secondary market. The number of private homes sold in the resale market – excluding sub-sales – has risen to 1,464 units this quarter, based on Urban Redevelopment Authority caveat data at June 19.

The figure is 71 per cent higher than the 856 units in Q1 this year, according to an analysis by Jones Lang LaSalle (JLL).
And more caveats could surface when full Q2 data emerges, with sales matching – or even surpassing – the 1,706 units sold in the resale market in Q2 last year, JLL reckons.
Average resale capital values have risen in Q2 from Q1 but are still below last year’s peaks across all tiers – mass market, prime and luxury prime. This could be a key factor fuelling resale deals.
Another factor could be HDB upgraders keen on buying a completed private home they can move into immediately. Also, rental yields from investing in completed property are higher than the measly interest rates earned on fixed deposits.
In another development yesterday, CB Richard Ellis said the median price per sq ft of freehold non-landed private homes sold by developers slipped 14.6 per cent from $1,051 psf in Q1 2009 to $898 psf in Q2, based on caveat data as at June 24.
However, once caveats for higher-priced projects like Martin Place Residences, The Wharf Residences and One Devonshire are lodged, the median psf price for Q2 is expected to be higher than the Q1 figure, CBRE added.
The firm expects developers to sell 3,500 to 4,000 new private homes this quarter, which would be 35 to 54 per cent higher than the Q1 figure of 2,596. The expected Q2 sales tally would be similar to levels achieved during the peak year of 2007, when developers sold an average of 3,700 units per quarter.
‘The stock market rally, coupled with strong liquidity and developers’ discounts, have resulted in a surge in new home sales this quarter,’ CBRE executive director (residential) Joseph Tan said.
JLL’s head of research (South-east Asia) Chua Yang Liang said additional factors buoying buying sentiment include pent-up demand and the interest absorption schemes. However, he cautioned: ‘I don’t reckon the current activity in the market is likely to remain if prices continue to rise unsupported by GDP growth.’
CBRE said that based on caveats lodged so far, HDB upgraders accounted for 65 per cent of buyers of new homes in the first half of 2009, higher than their 44 per cent share for the whole of last year. HDB upgraders have also been active in the secondary market, accounting for 49 per cent of buyers of resale and sub-sale units, up from their 33 per cent share last year, the firm added.
Sub-sales and resales are secondary-market transactions. Sub-sales involve projects that are yet to obtain a Certificate of Statutory Completion (CSC). Resales relate to projects that have received CSC.
JLL’s analysis shows the average resale capital value for non-landed homes in the mass market was $580 psf in Q2, up 9.4 per cent from Q1. It is also 17 per cent below the Q1 2008 peak and remains highly affordable to most HDB upgraders, JLL said.
In the luxury market, the average resale capital value rose 7.8 per cent quarter on quarter to $1,800 psf in Q2. Against the peak in early 2008, the latest Q2 figure was down 34 per cent.
Source: Business Times, 25 June 2009
Posted by About Singapore Property