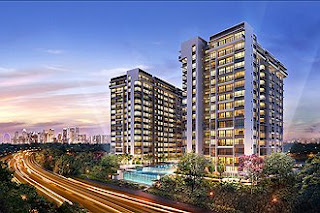 BUYERS continued to throng showflats over the weekend as the craze to pick up a new home shows no signs of abating.

Within three days of its Friday launch, Frasers Centrepoint managed to sell 302 out of 330 units at its 99-year leasehold Woodleigh Close project 8@Woodleigh. The average transacted price of the mass-market project was $790 per sq ft.

He said the strong response took him by surprise, though he was quick to add that 8@Woodleigh had help from the improving market sentiment and strong project-specific attributes.

Apart from location - near Potong Pasir MRT station and the yet-to-open Woodleigh MRT station on the North-East Line - a major attraction was the small, affordable units, he said.

The developer had earlier tweaked the mix of bigger and smaller flats from a ratio of 60:40 to 40:60, which added an extra 30 units to the development. It also reduced the size of the larger units slightly.

Buyers could be drawn to a 'speculative element', said Mr Lim, as 8@Woodleigh is next to the Stamford American International School and some buyers are hoping to rent out units to expatriate families.

The response has been so positive that Frasers Centrepoint, which sold 50 units at a Friday special preview, will dispense with an originally planned main launch this coming weekend as under 30 - mostly three-bedders - are left.

'We will release everything to capitalise on the momentum,' said Mr Lim.

Another project, Parc Seabreeze in Marine Parade, also saw demand after it apparently brought forward its launch. It sold about 50 units over three days since Friday at prices ranging from $1,050 psf to $1,550 psf, said agents.

The price is down from $1,600 psf to $1,700 psf quoted at the preview in May last year, which drew a lacklustre response then.

Even as mass-market projects did well, the upper-mid market also appears to be flourishing.

Investors have been flocking to the 152-unit One Devonshire in the Killiney Road area, with 130 units sold so far at an average price of $1,800 psf since a special preview over a week ago.

The recession-defying market exuberance has led some analysts to question its sustainability.

HSR Property Group executive director Eric Cheng said the buying interest stems from those afraid to lose out. Some people also made money in the stock market, while HDB valuations have been rising, boosting confidence in the market, he said.

But 'it's still a buyers' market', said Mr Lim. Though there is demand, buyers are selective.

With more competition amid the financial crisis, developers have taken to working with more property agencies to market their projects.

Instead of just one as was the norm during the 2007 boom, they now work with two or three agencies to ensure a wider reach, said Mr Cheng.

Mr Lim said the company did a pre-marketing test or survey about three months before the launch of its Jurong project Caspian. The wider the reach, the greater the chance of success in getting buyers hooked.

And that is what Hong Leong Holdings hopes to achieve by launching a page on social networking site Facebook to market its 329-unit The Gale in Upper Changi. It said this will enable them to disseminate information to Web-savvy property watchers and to engage with a wider audience.