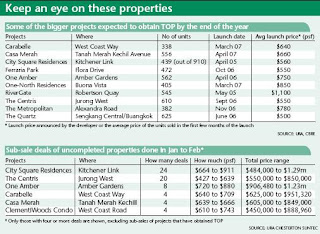 Buyers now have more choices as launches return to the market. There is also no lack of supply in the secondary market, where more projects - including several big ones - will obtain temporary occupation permits (TOPs) by the end of this year.

The sellers of projects yet to obtain TOP are often short-term investors, and in this present climate some may offer real bargains if they have an urgent need to offload their properties, experts said.
A project's TOP date is when those who had bought on deferred payment will have to pay for the bulk of the purchase price.
The deferred payment scheme was seen as encouraging speculation as buyers could profit by reselling their homes before the TOP date without much capital outlay. It was scrapped in late 2007.
'Most times, those who bought on deferred payment are usually the investors,' said Mr Colin Tan, Chesterton Suntec International's head of research and consultancy.
Although not many bargains have surfaced, more could come, experts said. The 104 caveats lodged in the first two months of this year - for projects that have yet to obtain TOP - showed prices are coming down, but only gradually, said Mr Tan, citing Urban Redevelopment Authority data.
Of the 104 deals, 24 were for City Square Residences at $664 per sq ft (psf) to $911 psf, compared with its starting price of $560 psf in 2005. Another 20 deals were done at The Centris at between $427 psf and $639 psf, compared with its 2006 launch price of $550 psf.
Singapore bankers are reluctant to repossess properties when property prices have not fallen steeply, Mr Tan said. 'As Singapore is still not in 'deep recession' - although we are moving towards it - these investors are able to rent out their properties and collect rent,' he said. 'So long as banks are receiving some kind of payment, they are not willing to force the issue.'
Mr Tan said he foresees a gradual decline in property prices for the next three to four months. The shrinking rental market may have a greater impact on the market thereafter, he added. 'For those waiting for 'bargains', you'll have to be patient and wait a little longer,' he advised. 'At the moment, while the rental market is declining, it is still some 15 to 20 per cent higher than before the run-up in the market.'
A property expert, who declined to be named, said: 'Buyers may want to look at projects where there is a great deal of speculative element, such as Marina Bay Residences and The Sail, where many people went in blindly. Some of them may now want to let go of their units.'
So far this year, two high-floor Marina Bay Residences units were sold in January at $1,528 psf and $1,638 psf, while two units at The Coast at Sentosa Cove were sold last month at $1,250 psf and $1,500 psf.
Back in late 2006, Marina Bay Residences was sold out in three days at an average apartment price of $1,850 psf or up to more than $2,700 psf, while The Coast initially sold for $1,500 psf on average.
This year, the bigger projects that are expected to obtain TOP include The Centris in Jurong West and Casa Merah in Tanah Merah.
In the Amber Road area where many new developments were launched in the past few years, One Amber will obtain TOP by year end. It will join two recently completed big condos, The Esta and The Sea View, and a few others under construction.
In Balestier, UOL Group said it expects the 180-unit Pavilion 11 in Minbu Road to obtain TOP in the second half of the year.
The 53-unit The Centrio in Irrawaddy Road - launched in May 2007 at $1,025 psf - is also expected to do so by the end of the year.
A nearby project, the 151-unit Montebleu, launched in March 2007 at $980 psf, will obtain TOP early next year. At the same time, there are new launches in Balestier, including The Mezzo and Domus.
In the prime area, Hiap Hoe expects to obtain TOP for its 46-unit Cuscaden Royale by the end of the year or early next year.
'TOP projects are much sought after by owner-occupiers because buyers can move in immediately into a brand-new property,' said Ms Kellie Liew, executive director of projects at HSR property group.
Prices in quite a few of these projects, such as Southbank, have dropped a fair bit, she said.
Southbank in North Bridge Road will obtain TOP next year. So will The Riverine by the Park nearby.
Savills Residential director Phylicia Ang said the secondary market will have bargains but they may not be easy to spot. Those with little time to spare may find new launches a better bet, she said.
Source: Straits Times, 15 Mar 2009
Posted by About Singapore Property