Some bleed from subsales but most come out ahead 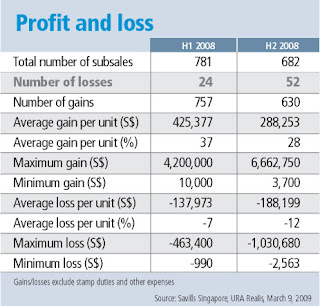 Deals that run up a loss double in H2 as market worsened
(SINGAPORE) In a tough property year, an overwhelming 95 per cent of those who sold private apartments and condos in the subsale market last year had managed to turn a profit.
But the number of subsales that chalked up losses more than doubled from 24 in first-half last year to 52 in H2, reflecting the deteriorating market conditions, especially in the fourth quarter.
For those who took a loss, the average loss per
unit also rose, from about $138,000 or 7 per cent in H1 2008 to $188,000 or 12 per cent in H2 2008.
But there were happy stories. One owner at The Sail, for instance, chalked up a gain of some $6.7 million after having held on to the property for about three years.
Savills Singapore's analysis of caveats showed that the number of loss cases rose as 2008 rolled along, from six in Q1, increasing to 18 in Q2, and stabilising somewhat at 20 in Q3, before jumping to 32 in Q4.
'There were more owners cutting losses in the subsale market in H2 2008, especially in Q4, following the Lehman fallout and the global meltdown. Sales trickled and more people sold at losses,' said Savills director (investment) Steven Ming.
And while there was an increase in the number who suffered losses on their subsale deals, the number of subsales that produced profits fell 16.8 per cent from 757 in H1 to 630 in H2. The average subsale gain per unit shrank steadily through the year, sliding from $425,000 or 37 per cent in H1 to $288,000 or 28 per cent in H2.
On the whole, the finding was that it is more rewarding to hold one's property for a longer period. On average, the biggest gains of $785,000 per unit were pocketed by those who bought in 2004 and sold in H2 last year, followed by those who had picked up their properties in 2005 and divested them in H1 last year, collecting an average gain of nearly $666,000.
The largest average loss of $210,000 was incurred by those who had bought in 2006 and sold in H1 2008.
Around 90 per cent of the 76 investors who suffered a loss in the subsale market for the whole of last year had bought their units in 2007 during the market peak.
Knight Frank executive director (residential) Peter Ow notes that usually an investor would cut losses in the subsale market when it is time to pay the developer. 'An investor exposed to a few properties bought on deferred payment scheme (DPS) may want to cut losses on the first one or two to improve his cashflow so when it is time to pay up for the third one, he can afford it,' he said.
Mr Ming points out that in addition to multiple property owners who may find it difficult to get sufficient bank loans to complete their acquisitions, those taking a hit in the subsale market may include 'savvy investors seeking to diversify their investments and allocating a part of the exposure to other undervalued asset classes'.
Savills calculated profit or loss as the difference between sale and purchase prices and did not take into account agent fees and other expenses. The analysis was based on a total 1,761 subsale deals of non-landed private homes captured in the URA Realis system as of March 9, 2009. Of these, it could trace and match previous caveat records for 1,463 units. Savills then compared the latest subsale price of each unit with the earlier price paid by the seller to work out the profit or loss.
Subsales, often seen as a gauge of speculative activity, are secondary market deals in projects that have yet to receive their Certificates of Statutory Completion. This may be anywhere from three to 12 months after the project receives Temporary Occupation Permit (TOP).
Savills's analysis also showed that the proportion of subsales done below $1 million per unit rose from 38.3 per cent in H1 last year to 45.9 per cent in H2, as affordability became important.
Projects with the highest number of subsale transactions for 2008 were The Sail @ Marina Bay (78 units), Citylights (77 subsales), Varsity Park Condo (59 units), City Square Residences (57 units), The Sea- view (52 units), The Esta (49 units) and Park Infinia at Wee Nam (48 units).
Some of these projects also saw the most number of subsale losses for the whole of 2008, for instance City Square Residences (six units), Citylights (four units) and The Sail (four units). In addition, The Cosmopolitan and Watermark Robertson Quay each had four subsale loss cases last year.
In H1 2008, Citylights saw the most subsales, at 60. In H2, The Sail was the top subsale project, with 40 units changing hands.
'Anecdotally, there appears to be a higher number of subsales that take place for projects that were approaching TOP. For example, the 1,761 subsale transactions in 2008 included 52 projects that received TOP in the same year,' Mr Ming said. Projects that obtained TOP in 2008 included The Sail, part of City Square Residences, The Sea View and The Cosmopolitan. Icon, City Lights and The Calrose were among the projects that received TOP in 2007.
Mr Ming said that with 10,000 homes expected to get TOP this year, 'we expect subsale transactions to remain active and the sell pressure will keep up this year, unless debt markets open up and financing for investors eases'.
Source: Business Times, 19 Mar 2009
Posted by About Singapore Property