Sniffing out buys in the mass market 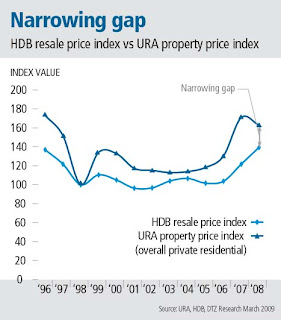 WITH the economic downturn, the residential market landscape has changed as developers shrink the size of units and offer steeper discounts to lure cautious buyers while banks tighten credit. So how will this downturn play out?

We compare the current situation, particularly in the mass market segment, with past downturns to gauge how prices are likely to perform and when recovery will be in sight.

The mass market segment has proved to be less volatile than homes located in the prime districts of 9, 10 and 11 - on the way up as well as on the way down.

Gentler declines
Similarly, on the way down, mass market homes have seen gentler declines compared with higher-end condos. Last year, prices of luxury homes fell 30 per cent while average prices of non-landed three-bedroom leasehold homes outside the prime districts fell just 8 per cent to $560 per square foot as at end-2008.

The extent of price fall, while dependent on economic performance, also depends on supply in the private residential market. Based on Urban Redevelopment Authority (URA) numbers as at end-2008, an average of 11,626 private housing units a year are scheduled for completion in the five years from 2009 to 2013. This is 34 per cent more than the annual average of 8,671 units in the last 10 years (1999 to 2008).

However, the overall housing supply is much less compared with the level in 1998 which saw a supply glut in the public housing market. Around 31,600 public housing flats were completed each year between 1996 and 2000 compared with about 5,000 units completed annually in the last five years. To avoid over-building of flats, the Housing Development Board (HDB) had put in place the build-to-order (BTO) system in 2001 to provide the main supply of new flats.


Under the BTO system, construction will only start when a majority of the units have been booked and buyers would have to wait three to four years for the flats to be completed. HDB's stock of unsold inventory is now estimated to be at a record low of under 1,000 units. Hence, the limited supply of new HDB flats will provide some support for the public housing resale market. This, in turn, should help hold up prices of mass market private homes.


The strong demand in the HDB resale market is closing the price gap between HDB flats and non-landed private homes, especially those in the suburban areas. However, there is room for the price gap to narrow further based on historical trends.


The price premium of private homes over HDB flats rose sharply in 2007 to unsustainable levels and will narrow as the private property market declines more steeply than the public housing market. Prices of HDB resale flats are likely to decline as the economy contracts further. The moderating rate of increase in the HDB resale price index and declining demand in Q4 2008 are signs of a weakening HDB resale market. Some HDB resale flats have already transacted below valuation this year. In this bearish scenario, private property prices would be further depressed. In Q1 2009, developers have already cut prices of new leasehold projects by 5-10 per cent.


So how long will this downturn last? The previous downturns lasted 2.5 to five years. While the property market saw a quick recovery after the 1998 Asian financial crisis, the recovery was slow after the 2001 Internet bubble burst, being compounded by a spate of adversities - the Sept 11, 2001 terrorist attacks, the Iraq war in 2003 and the Sars epidemic in 2003. The current downturn in the private residential market started only four quarters ago and is unlikely to bottom this year as the economic outlook is deteriorating. As to the timing and speed of the market's recovery, that will hinge on the economic recovery of the major developed nations.


Going forward, developers are expected to resize the units of developments that have yet to be launched to make them more affordable. This would be aided by declining construction costs which would lower total development costs.


Purchases under IAS
Developers continue to offer an interest absorption scheme (IAS) which is similar to the deferred payment scheme (DPS). Under the IAS, buyers sign up for a loan with a bank but won't have to fork out any cash other than the 20 per cent downpayment until the project gets its Temporary Occupation Permit (TOP). Although buyers may find it attractive not to have to make any progressive payment or service a loan before TOP, they should be aware that they may have to pay a premium of around 3 per cent under the IAS.


In addition, they would usually be locked into the loan for two years under the scheme. So complications could arise should they need to sell their property within the lock-in period.


Meanwhile, those shopping around for a property now should keep this checklist in mind:


While one naturally prefers to buy at the bottom of the cycle, this is harder to do with property than with stocks as each unit and project is different. The unit you want may not be up for sale when prices are at their lowest.

And there are a range of personal decisions that cannot be perfectly timed with the market cycle. For instance, newly married couples setting up home, parents moving closer to their children's schools, foreigners buying for their children who are studying in Singapore, etc. In addition, a home buyer with a longer holding period is more prepared to ride out the down cycle.

A home buyer should work out his budget to ascertain if he can afford to service the mortgage even in the worst-case scenario. A general guide is that the monthly mortgage payment should not be more than 40 per cent of monthly household income. But in these uncertain times, it would be more prudent to consider a lower monthly mortgage service ratio. The key at this point is to buy within one's means.