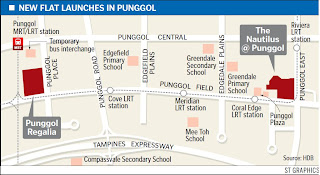 Units are smaller and cheaper due to design and location
The Housing Board (HDB) yesterday launched its first batch of new Punggol flats for the year.
Units are priced at 10 to 16 per cent below the launch of Punggol Regalia in December, primarily due to location and design features.
The flats are slightly smaller and 'further from the town centre and main transportation nodes', said an HDB statement yesterday.
The Nautilus @ Punggol is a standard project - essentially new flats with minimal frills and basic features.
On offer are 413 four-roomers of 90 sq m going for $228,000 to $274,000 and 106 five-roomers of 110 sq m priced from $305,000 to $357,000.
The Nautilus, consisting of eight blocks of 18 storeys each, is on the eastern side of the suburb and further from the Punggol town centre.
It is served by the Riviera and Coral Edge LRT stations.
In contrast, Punggol Regalia, located at a prime spot next to Punggol MRT station , is a premium project priced at $252,000 to $316,000 for a four-room unit and $342,000 to $428,000 for a five-room unit.
Premium flats come with enhanced architectural designs and better internal finishes.
PropNex chief executive Mohamed Ismail said he expected healthy demand for the Nautilus although it 'may not be as good as' the response to HDB's Woodlands project launched last month.
Called Champions Court, that development offered 815 units, ranging from studio apartments to five-room flats.
ERA Asia-Pacific's associate director Eugene Lim said the Nautilus is 'very attractively priced' although its location may not be as alluring as previous Punggol projects.
In the long term, however, Punggol's transformation into a waterfront town will draw first-time home owners, he said.
The Nautilus will be constructed under the HDB's build-to-order (BTO) scheme where flats are built only if a certain level of demand is reached.
The HDB has said it plans to launch about 3,000 BTO flats in the first half of this year.
These include 1,400 smaller units, from studio apartments to three-roomers.
Buyers are likely to see more new flats in Punggol this year as the HDB moves to build up the suburb's population.
A site called Punggol Residences, next to Punggol MRT station, was recently marked as being under construction on Singapore Land Authority maps.
By 5pm yesterday, the HDB had received 72 applications for the 519 Nautilus flats.
In contrast, Champions Court attracted 205 applications for 815 flats on the first day of its launch.
Source: Straits Times, 27 Mar 2009
Posted by About Singapore Property