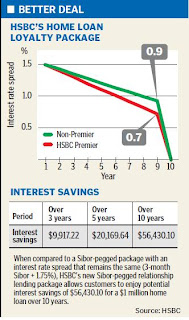 HSBC has unveiled a new home loan pegged to the Singapore Interbank Offered Rate (Sibor) that rewards longer-term borrowers with an interest rate that gets increasingly competitive over time.
Its new loan package sees the interest rate charged on top of the three-month Sibor - the rate at which banks lend cash to each other - trimmed each year.
Typically, loans pegged to the Sibor have either flat or increasing interest rate spreads.
The new product follows HSBC's launch last year of a similar package, which cut the interest rate spread at the end of every anniversary year, up to the third year of the loan.
For its new 'loyalty package', HSBC customers will see a year-on-year decrease in the interest spread until the 10th year, when it will hit zero.
During the first year, borrowers will pay an interest rate spread of 1.5 per cent above the three-month Sibor.
The spread is then reduced by 0.075 percentage point at the end of each anniversary year.
HSBC has made the arrangement even sweeter for its Premier customers whose interest rate spread will be cut by 0.1 percentage point at the end of each anniversary year.
In the 10th year of the loan, the interest rate spread will be reduced to zero for all customers.
Thereafter, the rate reverts to Sibor plus 1.2 per cent for the remaining tenure of the home loan.
Mr Sebastian Arcuri, head of personal financial services at HSBC Singapore, said the response to its earlier Sibor-pegged loyalty package had been 'extremely positive'.
'In giving customers a loyalty discount on the interest rate spread for their Sibor-pegged home loan, we want to help them maximise the value of their relationships with us,' he said.
But observers caution that home buyers must do their homework before choosing HSBC's latest mortgage.
First, Sibor can be volatile and those looking for fixed cash flow and protection against interest rate movements should opt for fixed-rate packages.
'If Sibor starts to exhibit volatility down the road again, these lower spreads might not mean much to customers,' said Mr Geoffrey Ying, head of the mortgage division at financial advisory firm New Independent.
A DBS Bank spokesman said: 'In selecting the package, customers need to consider how the rates are determined and how stable they are.
'A three-month package would require one to actively monitor the interest rate environment and review the loan structure regularly.'
Next, customers should average out the interest rate spreads over 10 years and see how the savings compare to other offers.
'There is no free lunch,' said United Overseas Bank's head of loans Kevin Lam. 'The package is effectively a lock-in because you need to stay long enough to enjoy the zero (interest spread).'
HSBC said that to enjoy its new home loan, customers must have an average annual balance of $100,000 or more. It added that there was no lock-in period for the loan.
Source: Straits Times, 12 Mar 2009
Posted by About Singapore Property