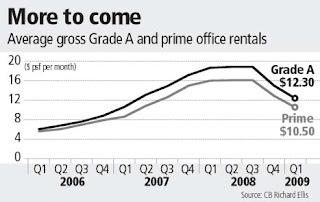 18% drop in Q1 a precursor to further falls in the rest of the year, says CBRE

(SINGAPORE) The slide in prime office rents has continued into the first quarter of this year. CB Richard Ellis estimates that average Grade A and prime office rental values in Singapore both slipped about 18 per cent in Q1 this year over the preceding quarter.
CBRE's estimate of the Q1 2009 average gross monthly rental of Grade A office space was $12.30 per square foot, down 34.6 per cent from the peak of $18.80 psf in Q2 and Q3 last year.
'We foresee the average monthly rent for Grade A space to fall to single-digit level during the course of second-half 2009,' CBRE executive director (office services) Moray Armstrong said.
Vacancy for Grade A offices also rose from 0.9 per cent in end-2008 to 2.9 per cent by end-March 2009.
CBRE predicts that more of the same can be expected for H1 2009 as demand stays weak. 'Vacancies can be expected to rise sharply and there will be no arrest in the slide of rents,' Mr Armstrong reckons.
'I think there's likely to be higher leasing activity by year-end and certainly going into 2010 - although the outlook for rents remains bearish,' he added.
He also forecasts that 'the Singapore office market could see negative take-up for the whole of this year in excess of one million sq ft, around the levels the market has experienced as recently as 2002/2003'.
Last year, the market saw a net increase in office demand of slightly under 200,000 sq ft, not even 10 per cent of the figure for 2007.
Cushman and Wakefield Singapore managing director Donald Han said that negative net demand for office space for 2009 could be anywhere from 500,000 sq ft to one million sq ft, depending on how badly the economy fares.
He estimates that average monthly Raffles Place rents will slip by about 30 per cent for the whole of this year to slightly below $10 psf by end-2009. 'About 38 per cent of prime office space in Singapore is occupied by the financial services sector and this is the segment that's worst hit this downturn,' Mr Han pointed out.
CBRE's average monthly rental estimate for Grade A space - which covers the best office space within the firm's prime office basket - of $12.30 psf as at end-March this year is 18 per cent lower than the $15 psf as at end-2008.
Its $10.50 psf estimate of monthly average prime rental value as at end-March 2009 represents an 18.6 per cent quarter-on-quarter decline from $12.90 psf as at end-2008.
The end-Q1 2009 rental estimates for both categories of office space represent drops of about 34 per cent from the same period last year.
CBRE reckons that the Grade A vacancy rate rose from 0.9 per cent as at end-2008 to 2.9 per cent as at end-March 2009. In the broader Core CBD comprising the micro-markets of Raffles Place, Marina Bay, Shenton Way and Marina Centre, the vacancy rate increased from 4.6 per cent as at end-2008 to an estimated 6.9 per cent as at end-March 2009. These vacancy figures do not take into account 'shadow space' or excess space that companies try to sublet.
'Right now, the shadow space is at a tolerable level, but we haven't seen the full knock-on impact of attrition and realignment of businesses. In due course, shadow space will grow as subletting activity rises, and this will serve to further erode rentals,' Mr Armstrong said.
Pre-lease momentum in new office developments has stalled in the past two quarters as corporates grapple with more immediate challenges within their businesses before even looking at long-term premises planning, CBRE said. But some end users now have a bit more clarity on their requirements. 'Some of the merging companies will necessarily need to co-locate and those are the deals starting to emerge,' Mr Armstrong said.
Towards the later half of 2009, CBRE expects a few selective office deals to firm up, largely due to the expected premises consolidation requirements arising from mergers and company restructuring.
Source: Business Times, 24 Mar 2009
Posted by About Singapore Property