For years, Districts 9, 10 and 11 – covering Orchard, Holland, Newton and Bukit Timah – have been the must-have residential areas in Singapore.

But as the recent property boom spreads to the suburbs, a number of newly popular districts have emerged outside these traditional prime areas.

Developers with a keen eye snapped up land around city-fringe locations and suburban MRT stations, and have been launching projects in these areas over the last few months to great demand.

Some of these new sizzling spots may come as no surprise. District 2, for instance, comprises mainly the Tanjong Pagar area around the Central Business District, which is evolving into an inner-city residential hub. Recent launches such as City Developments’ 76 Shenton and Far East Organization’s Altez have been well-received. 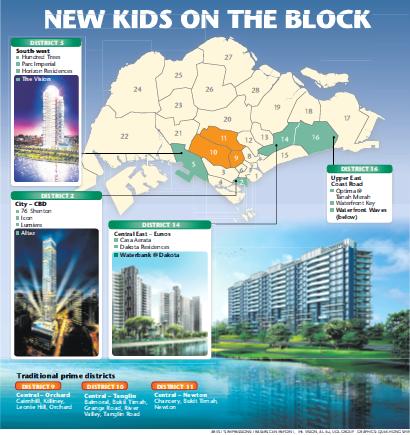 Slightly farther from the city is District 14, where Waterbank @ Dakota and Casa Aerata have been sell-outs, and Dakota Residences is 95 per cent sold.

Property consultants say the opening of the two integrated resorts this year has boosted the popularity of these more centrally located areas.

Mr Joseph Tan, executive director for residential services at real estate consultancy CB Richard Ellis, said: ‘Not only do they attract people who bought for their own use, they also attract a good number of property investors with a view to future price appreciation or rental income.’

Ms Tay Huey Ying, director of research and advisory at Colliers International, explained: ‘District 2 has grown in popularity since 2006 and 2007 when the development of the two integrated resorts and Marina Bay Financial Centre popularised inner-city living.’

She added that homes there have remained popular since then, although sales have slowed, owing to their relatively high price tags, and especially with investors turning more cautious following the global financial crisis.

But there are also other ‘hot’ districts that may be less obvious, including District 5 in the West Coast and District 16 in Upper East Coast.

In District 5, recent launches such as Hundred Trees and The Vision were 95 per cent sold within three months, and Parc Imperial was 100 per cent sold, according to data from DTZ Debenham Tie Leung. Over in District 16, Optima @ Tanah Merah sold out in just three days.

These areas have drawn interest because of their proximity to current or future MRT stations, good local schools and international schools, said Mr Tan. Buyers of homes in the area are mostly locals – HDB upgraders and private homeowners – and also permanent residents settling down here.

‘These properties tend to be more affordably priced than those situated in the city or at the city fringe,’ he said.

Ms Chua Chor Hoon, head of South-east Asia research at DTZ Debenham Tie Leung, said in general, there are more ‘hot’ areas in Singapore now than in the past because of two main reasons: collective sales of estates in older areas and deliberate government policies to decentralise office hubs.

With more people, including expats, working outside the CBD, there is higher demand for rental homes – and hence more potential for property investors – in other parts of the island now, she said.

CBRE’s Mr Tan agreed: ‘With new initiatives to chart the progress of the country, future growth areas like Marina Bay, Jurong East, Kallang Riverside and Punggol Waterfront town are becoming more and more attractive because there is still room to encompass new ideas.’

In the years to come, Ms Tay believes new emerging districts would include those with newly opened or soon-to-be-constructed MRT lines, as well as districts within growth areas designated by the Government.

Still, property consultants maintain that the traditional prime residential districts of 9, 10 and 11 will always retain their charm.

‘The exclusivity and prestige attached to certain addresses cannot be fully replicated in the new growth areas,’ concluded Mr Tan.