Real estate gets a new gauge of market pulse

(SINGAPORE) In a historic move, the Real Estate Developers' Association of Singapore has teamed up with the National University of Singapore's Department of Real Estate (DRE) to develop a Real Estate Sentiment Index (RESI), and it shows a lower reading for the second quarter of this year than for the first quarter. 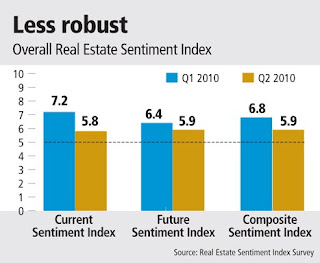 More respondents were still positive (rather than negative) on the overall performance of the prime and suburban private residential markets over the next six months but the consensus as indicated by net balances weakened in the second quarter compared with the first quarter.

On the other hand, the net balance for offices improved substantially, in tandem with improving sentiment in this segment in April-June.

The survey also found that 51 per cent of developers polled for Q2 expect price growth for new residential launches, down from 85 per cent in Q1.

About 68 per cent of developers surveyed in Q2 expect more units to be launched over the next six months, down from 83 per cent in the Jan-March period.

The findings of the survey will be officially released this morning at the Redas Property Prospects Update 2010 seminar at Orchard Hotel.

Some market watchers welcomed Redas efforts in coming up with an objective method of gauging the confidence level of senior executives of property developers - and making it public. 'It's good to hear from the horse's mouth,' said DTZ executive director Ong Choon Fah.

Redas CEO Steven Choo noted that 'while business expectation surveys are available for the manufacturing and service industries, there is currently no indicator specifically tracking sentiment in the fast-paced real estate market of Singapore'.

Some industry watchers also pointed to the refreshing change at Redas. 'Previously, something like this, showing a slowdown in sentiment, would have been considered extremely sensitive and developers may have tried to hide it. Now they're more open about it,' said an observer.

Mrs Ong said: 'Releasing the RESI shows just how far Redas has come. It reflects the maturity of the property market and stakeholders. It's important to give the true market signals to all stakeholders - including home buyers and government - if we're going to have a sustainable property market based on sound fundamentals.'

Redas and DRE developed the quarterly structured-questionnaire survey, which is conducted among senior executives of Redas member firms - mostly developers but also property consultants, architects, quantity surveyors and other professionals.

Dr Choo, who assumed the post of Redas CEO nearly a year ago, says: 'The partnership between NUS and Redas has ensured academic rigour and added credibility to the new index. We are confident that in time, RESI will become an authoritative index and a highly-valued forward indicator for the property market, as well as an invaluable tool to guide the market and industry players, including investors and policymakers.'

Redas received about 70 responses for each of the Q1 and Q2 surveys - from largely the same people.

The survey measures respondents' perceptions of current market conditions/ performance (now, compared with six months ago) and future expectations (over the next six months).

The RESI comprises three indices. The Current Sentiment Index, where respondents are asked to rate overall Singapore real estate market conditions now compared with six months ago, fell from 7.2 in Q1 to 5.8 in Q2. The Future Sentiment Index, where respondents rate overall property market conditions over the next six months, also slipped from 6.4 to 5.9.

As a result, the Composite Sentiment Index, which is the average of the two indices, declined from 6.8 in Q1 to 5.9 in Q2.