After sliding 22% last year, rates are expected to increase by 5-10% this year

AVERAGE daily serviced apartment rental rates for the high-end and mid-tier segment here are expected to increase by about 5 to 10 per cent this year after sliding 22 per cent for the whole of last year, says Savills Singapore.

The property consultancy's index for serviced apartment rents in the segment reflects a 2.9 per cent quarter-on-quarter increase in Q1 2010. On average, daily rates ranged from $260-320 for mid-tier and high-end service apartments in Q1 2010. In a report on the Singapore serviced apartment market released yesterday, Savills noted that demand prospects are generally looking positive while supply is relatively stable. 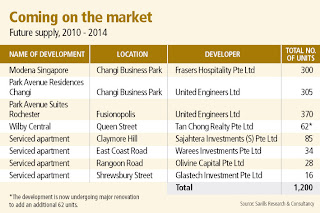 'Going forward, the economy is likely to see firmer growth with many multinational companies expecting to increase their headcount this year. The latest survey by Hudson, a US-based employment services firm, shows that 51 per cent of the 400 companies surveyed intend to hire in Q1 2010, an increase from 34 per cent in Q4 2009. This could lead to a larger pool of expatriates working in Singapore in the coming quarters,' Savills said.

There are currently about 50 developments with a total of over 4,600 serviced apartments in Singapore. In the next four years (up to 2014), a further supply of about 1,200 units from eight developments are expected to enter the market, including the 300-unit Modena Singapore, 305-unit Park Avenue Residences Changi (both at Changi Business Park) and 370-unit Park Avenue Suites Rochester at Fusionopolis.

The average occupancy rate for high-end and mid-tier serviced apartments stood at 86 per cent in Q1 this year, reflecting a 1.5-percentage point rise from the preceding quarter and a 15.7-percentage point surge from the same period last year amid the economic recovery.

During the global financial crash, when many MNCs scaled back their operations in Singapore, the occupancy rate slipped from 89 per cent in Q3 2008 to a low of about 70 per cent in Q1 2009.

Savills noted that during the past two years, more high-end serviced apartments have come onto the market, including Ascott Raffles Place Singapore, Pan Pacific Serviced Suites and Orchard Scotts Residences. Asking rents for one-bedroom units can range from $16-20 per square foot per month.

'Highlights at the Pan Pacific Serviced Suites include grocery delivery, luggage packing services, a selection of pillow and bath menus and a 20-metre swimming pool filled with mineral water,' Savills noted in its report.

Most of these comprise mid-tier serviced apartments or budget serviced apartments with monthly asking rents of $10-13 psf or $6-7 psf respectively for a one-bedroom unit. An example is Fraser Place Fusionopolis, which opened last year to serve expats working at the biomedical, infocomm and media hub of Buona Vista's one-north.

The Ascott Ltd, including Ascott Residence Trust, is in second position, with a 20.5 per cent share, followed by Frasers Hospitality Pte Ltd (9.7 per cent), Allgreen Properties (6.3 per cent) and Tan Chong Realty (5.1 per cent).