MORE respondents polled for Real Estate Developers' Association of Singapore's (Redas's) and NUS Department of Real Estate's (DRE's) Q2 2010 survey were still positive rather than negative on the overall performance of the prime and suburban residential markets over the next six months. However, the consensus as indicated by the net balances was weaker compared with the Q1 survey.

A net balance of +32 per cent of respondents in Q2 said that they expect better future market performance (over the next six months) in the prime residential sector, down from a +54 per cent net balance in Q1. 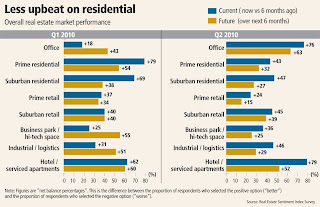 Likewise, the net balance of respondents who indicated better future market performance for the suburban private housing sector also slipped from +38 per cent to +27 per cent.

The respondents who selected the neutral option (such as 'Same') are omitted from the calculation. A '+' sign in the score denotes a net positive sentiment (optimism) and a '-' sign indicates net negative sentiment (pessimism). The derived net balance scores are not weighted by the size of the respondents' business.

Market watchers said the survey findings tallied with ground feedback. Generally, sentiment for the private housing market was less upbeat in Q2 as the sovereign debt problems in European economies unfolded. Some potential buyers also felt priced out of the market after rapid price increases and took a break during the World Cup and June school holiday season.

On the other hand, the outlook for the Singapore office sector improved in April-June as net office take-up continued to increase against the backdrop of the Republic's economic recovery.

Reflecting this, the survey shows net balance of +63 per cent in Q2 for future performance of the office sector, an improvement from the Q1 figure of +43 per cent. A lower percentage of developers in Q2 expect stronger interest in land sales - both the Government Land Sales (GLS) Programme and private sector en-bloc sales market - over the coming half year compared with those polled in Q1.

About half of the developers in the latest survey said that the level of interest for both sources of land will remain unchanged in the next half year.

Only about 27 per cent of developers surveyed in Q2 expect more interest in the GLS Programme in the next half year, down from 71 per per cent in Q1.

Developers were also asked to identify the potential risks that may adversely impact market sentiment in the next six months.

In the second quarter, about 73 per cent and 63 per cent view a global economic slowdown or decline and an increase in supply of new development land respectively as the key threats - significantly higher than the 56 per cent and 44 per cent recorded in the previous quarter.

Other major risk factors listed by developers in the latest Q2 survey include rising interest rates (49 per cent of developer respondents) and excessive supply of new property launches (54 per cent).

Notably, about 49 per cent of the developer respondents were concerned with government intervention to cool the market over the next six months, significantly lower than the 81 per cent registered in Q1 this year.

Following government measures to cool the market in September last year and February and the record GLS programme for second half 2010 announced in May, the market probably read that the danger of further cooling measures has receded for now, say market watchers.

Among development cost concerns over the coming half year, developers said that their biggest worry is rising land prices, building materials cost and labour cost, with 90, 76 and 73 per cent respectively of developers polled expressing a moderate to high level of concern.

Interestingly, the percentage of developers who are 'very concerned' about escalating land cost fell from 83 per cent in Q1 to 35 per cent in Q2. 'This could be due to the unexpected or suddenness of the spike in land bid prices seen at state tenders in Q1. In contrast, the 'shock effect' probably lessened as more tenders closed in the second quarter. However, I must emphasise that rising land cost is a very major issue for the development business,' says Redas CEO Steven Choo.