Singapore's richest get 17% wealthier this year

(SINGAPORE) The Republic's wealthiest are enjoying better fortunes this year, in tandem with the local economy's improving performance, according to data collected by Forbes Asia.

The publication, which tracks the wealth of Singapore's 40 richest people, said their total net worth this year is US$45.7 billion (S$62.4 billion) - up 17 per cent from last year's US$39 billion.

Of the lot, 26 tycoons saw their wealth increase this year, while seven suffered declines. 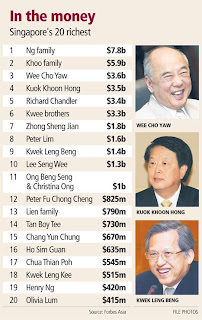 The family of the late Ng Teng Fong - who died in February - topped the list with a combined net worth of US$7.8 billion.

Still, they were among the few whose wealth declined - from US$8 billion the year before, as the value of their shareholding in Hong Kong developer Tsim Sha Tsui Properties fell 18 per cent over the past year, on fears of a slowdown in China. Forbes Asia said the biggest chunk of the family's wealth continues to come from its privately held Singapore property development company Far East Organization.

Meanwhile, the family of the late Khoo Teck Puat (who died in 2004) is second, with a total net worth of US$5.9 billion, up from US$5.5 billion in 2009. The family - the 14 children who inherited the fortune - sold its stake in Standard Chartered Bank to Temasek for US$4 billion in 2004. Its main asset is the Goodwood Group of hotels and a minor stake in the Ng family's Orchard Parade Holdings.

United Overseas Bank chairman Wee Cho Yaw moves up to third from fifth place last year, adding US$500 million to his wealth. Wilmar International's chairman Kuok Khoon Hong holds steady in fourth place with a net worth of US$3.5 billion. He's expected to add more to his fortunes, however, with the recently inked US$1.5 billion deal to buy Sucrogen (the largest raw sugar producer in Australia and maker of fuel ethanol) expected to be completed by September.

There were also some notable entrants to the list this year. Making a debut, at No 5, is New Zealand- born social entrepreneur Richard Chandler, who became a Singapore resident in 2008. The 52-year-old heads RF Chandler (a fund which invests in emerging markets) and has also set aside US$100 million for educational causes in the developing world.

The other newcomers to the top-40 list this year are Otto Marine's Yaw Chee Siew, who comes in at No 22, with a total net worth of US$385 million, and ARA Asset Management's John Lim at No 38, with US$202 million.

And returning to the list, after a two-year absence, is Osim International's Ron Sim. He re-enters at No 28, with a net worth of US$301 million, after having written off his investment in loss-making Brookstone in 2008.

Hotelier Ong Beng Seng and his wife Christina Ong are also first-time billionaires - with a combined wealth of US$1 billion, up from US$700 million last year, thanks to the better performance of their hotel and retailing empire. Between them, they control Hotel Properties, UK fashion house Mulberry, the Club 21 retail chain and the Como Group.

Meanwhile, among those suffering a decline in fortunes is Yanlord Land Group's Zhong Sheng Jian, who made his fortune from China's property boom over the last two decades, and was named 'Businessman of the Year' at BT's Singapore Business Awards 2010. His net worth fell 10 per cent from the year before, to US$1.8 billion this year, as Yanlord's stock price fell due to worries about the Chinese government's efforts to curb real estate prices.

The full list of Singapore's richest can be found in the August issue of Forbes Asia.

The magazine said it compiled the list by calculating the individuals' public net worth using share prices and exchange rates as at July 14. For privately held wealth, it estimated what they would be worth if they were public.

The publication also said that this ranking, unlike the Forbes billionaire list, includes numerous family assets shared by individuals and their children, grandchildren and siblings. Where family assets are held by extended families, such as the Kwek cousins (that is, Kwek Leng Beng, Kwek Leng Kee and Kwek Leng Peck), Forbes Asia split them into separate entries.