(SINGAPORE) Consumers in Singapore remain among the most optimistic in the region - despite a drop in consumer confidence in the second quarter.

The Consumer Confidence Index of Singapore, as measured by InsightAsia, fell 12 points to 126 in Q2 after witnessing a strong upward trend since the lowest point of the recession. Singapore is still far above the neutral point of 100.

Consumers were thrilled when the economy emerged from the recession sooner than expected and are now becoming accustomed to positive economic circumstances. 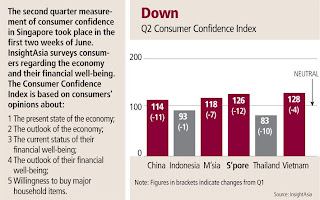 InsightAsia, a market research group specialising in the Asia-Pacific region surveyed 10,800 people across six Asian markets.Although economic growth in Singapore continues to accelerate, consumers expressed lower confidence in economic circumstances. The downward correction of the Consumer Confidence Index is in line with other countries in the region that are also showing healthy growth figures. China, Malaysia and Vietnam also saw a decrease in consumer confidence - even though their economies are in good shape and have GDP growth forecasts of 5-10 per cent in 2010.

An unexpectedly swift recovery from the recession led to increasing consumer optimism, which then dropped slightly in Q2. Consumers in these countries remain confident, but their initial enthusiasm has waned somewhat.

Consumers in Singapore still feel that the economy is improving, though not as strongly as before. They have also moderated their expectations for future economic growth. Singaporeans maintain a high level of satisfaction with their financial well-being, but have moderated their optimism about the coming year.

Overall, Singaporean consumers still have a very positive view of economic circumstances, resulting in a Consumer Confidence Index of 126.

Singapore trails slightly behind Vietnam (128) but leads Malaysia (118), China (114), Indonesia (93) and Thailand (83); all countries that are recording positive growth figures.

Singapore's recovery from the recession continued into Q2. A record year-on-year GDP growth of 19.3 per cent outstrips the 16.9 per cent growth recorded in Q1 and far exceeds growth figures of other economies in the region.

This very strong growth was driven by exports and tourism. Exports increased particularly through pharmaceuticals and electronics, while new attractions drew more tourists to the island state.

The year-on-year growth figures are calculated against a low base, as the beginning of 2009 was the low point of the recession. Growth in the remaining quarters of 2010 will be calculated against higher base figures. Therefore GDP growth is expected to decelerate in the second half of 2010 and full-year growth is expected to register at 13-15 per cent.

The robust economic growth of China has benefited many other economies in the region. The Chinese government is taking measures to reduce the risks of overheating the economy. Lower demand in China will reduce the exports of other countries in Southeast Asia.

Along with a debt crisis in the EU and the hesitant recovery of the US economy, this may slow growth in South-east Asia in the second half of 2010. However, analysts are positive about growth prospects in the region. The IMF estimates regional economic growth for 2010 and 2011 of around 6 per cent.