Buyers have landed, they're mostly local

Foreigners may be in the spotlight, but profile of landed property buyers sticks to trend

(SINGAPORE) Recent high-profile purchases of bungalows on Sentosa Cove by Chinese citizens may have given the impression that foreigners (including PRs) have been snapping up more landed homes of late, but numbers tell a different story.

Not only do Singaporeans remain the predominant buyers of landed homes here, but there has also been no rising trend in the share of foreigners (and PRs) picking up such properties. Over the past four years, their combined share of landed home purchases across Singapore averaged 6.2 per cent per quarter. 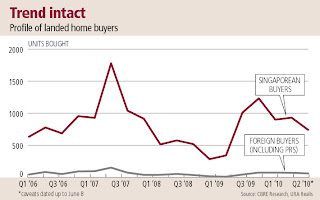 This share seems to rise a bit every time the market is hot and it drops when the markets cools.

For the first half of this year, Singaporeans remained the predominant buyers of landed homes across the island. However, on Sentosa Cove, foreigners including Singapore permanent residents acquired nearly the same number of houses as Singaporeans, shows an analysis by CB Richard Ellis.

Foreigners and PRs bought 16 landed homes on Sentosa Cove while Singaporeans have picked up 17 so far this year, based on CBRE's analysis of URA Realis caveats data as of June 22. The study captured caveats lodged up to June 8.

Foreigners (including PRs) bought 129 landed residential properties this year, up to June 8. Of these, 115 were purchased by PRs.

Non-PR foreigners bought the other 14 landed houses - comprising 12 properties located on Sentosa Cove and two in district 5. The latter are likely to be strata landed houses in The Vision in the West Coast area, say market watchers. Foreigners can buy strata landed properties within developments with condominium status without seeking approval from Land Dealings (Approval) Unit.

Their purchases this year give foreigners a 6.8 per cent share of the total 1,905 landed homes transacted up to June 8. Singapore citizens had an 87.7 per cent share, with companies buying the other 5.5 per cent. 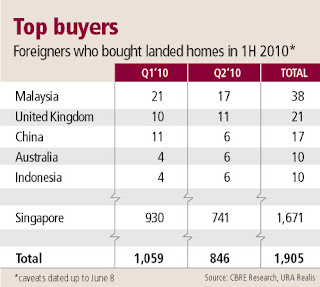 Between Q1 2006 and Q1 2010, on a quarterly average basis, landed homes made up just 3.8 per cent of the total number of private homes bought by foreigners and PRs here. For H1 2010 (up to June 8), the figure was 3.4 per cent. Apartments and condos remain the mainstay of foreign buyers' private residential purchases in Singapore.

CBRE's executive director (residential) Joseph Tan expects 3,500-3,800 landed homes to be sold this year as the Singapore economy continues to strengthen - in line with the four-year (2006-2009) average demand of 3,713 units. 'Since supply is relatively limited, prices of landed homes are expected to rise by 10-15 per cent in 2010. Sentosa Cove will continue to be popular with foreigners because of its resort status as well as the ease of obtaining government approval for purchase,' he added.

DTZ executive director (consulting) Ong Choon Fah does not expect the foreign share of landed home purchases to change significantly. The restrictions that foreign buyers face in owning a landed home here mean demand will be for consumption and not investment, she says. Typically, they need a go-ahead from the LDAU, may own only one landed property and are not allowed to rent it out.