Attractions springing up in Marina Bay

Big Walk and carnival to celebrate the area's development so far

HOT on the heels of the Marina Bay Sands (MBS) resort's opening last month, new additions have been springing up to add to the bay's 'necklace of attractions'.

Across the bay from the resort, the new 100-room Fullerton Bay Hotel will welcome its first guests today, while the refurbished Customs House was unveiled yesterday.

The latter has been turned into a complex that features four new restaurants, with a fifth to open soon. A new rooftop bar called Lantern will also open at the six-storey Fullerton Bay Hotel.

A measure of comfort has also been extended to visitors to the area. Several features such as solar-powered fan shelters and a mist-spraying sculpture have been completed along a 3.5km waterfront promenade which allows pedestrians to circle the bay on foot. 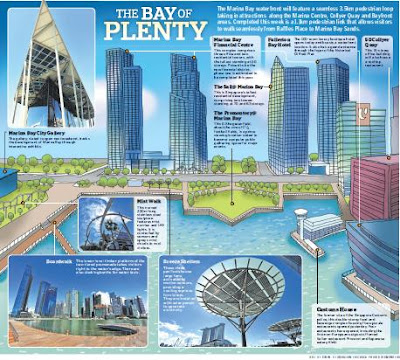 A timber boardwalk has also been built which lines the southeastern bank where MBS is situated. It includes seats by the water's edge.

To celebrate the developments so far, a mass walk and carnival will be held next weekend, with a movie screening, dance and music performances, games, and food stalls. More than 80,000 people are expected to participate in the activities.

The New Paper Big Walk @ Marina Bay will be held on July 18 in conjunction with The Big Carnival @ Marina Bay. For the first time, Prime Minister Lee Hsien Loong will flag off The Big Walk at 7.30am at the Singapore Flyer. Tickets for the mass walk have all been snapped up.

More attractions will come to the area over time. By early next year, 50 Collyer Quay, a development comprising an 18-storey office block, an aerial tower and an overhead bridge linked to Hitachi Tower, will come up next to the Fullerton Bay Hotel.

The overhead bridge will be an attraction in itself, featuring eight to nine shops spread out over 2,800sqft of retail space, said developer Overseas Union Enterprise.

A rooftop restaurant will open at the office block, while the aerial tower will have one or two restaurants spread out over two levels at the top. Combined, these food and beverage outlets will take up 16,000sqft of space.

Just a stone's throw away, the Marina Bay Financial Centre's two office towers and a residential tower have swiftly taken shape as well. Tenants have begun moving in, and the buildings will be occupied by the fourth quarter of this year.

By the end of the year, the new Marina Bay Link Mall located underneath the development will open its doors. The underground mall will comprise shops, restaurants and a supermarket.

MBS expects to open more offerings by that time as well. These include the museum, shops along the boardwalk, and two glass pavilions.

In the coming months, visitors to the area will be able to take water taxis making stops along the bay and up the Singapore River, said an Urban Redevelopment Authority spokesman yesterday.