Build-to-order developments, with eco-friendly features, will add 1,429 flats to the market

ANOTHER 1,429 flats will be up for grabs in fast-developing Punggol after the HDB launched two new build-to-order (BTO) projects yesterday. 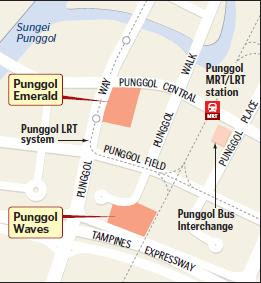 Yesterday’s launches are part of a broader HDB plan to launch 12,000 flats in the first three quarters of this year amid strong buyer demand. In the first four months of the year, 5,082 flats have been offered. A further 1,100 BTO units will be launched in Yishun and Jurong West next month.

More future launches have been earmarked for estates such as Bukit Panjang, Sengkang and Woodlands. Construction of BTO projects is triggered once a certain level of sales has been achieved.

Punggol Emerald – located at the junction of Punggol Way and Punggol Central – will boast 188 studio apartments, 96 three-roomers, 350 four-roomers and 222 five-roomers.

Both developments will incorporate eco-friendly features to achieve energy efficiency, environmental protection and other green features, such as a secondary roof system to reduce heat, as part of plans to develop Punggol as an eco-town, HDB said.

It added that the BTO supply will also be supplemented by flats under the Design, Build and Sell Scheme, with the tender of a Yishun site closing on May 18 expected to yield about 700 units.

‘Although it is not as popular as the mature estates, Punggol as a new town is growing in popularity.’ He added, however, that Punggol Waves was next to the Tampines Expressway and might therefore attract a lower subscription rate than Punggol Emerald.

Applications for the new BTO flats can be made online at www.hdb.gov.sg until May 3.