THE recent buzz in the commercial leasing market has finally translated into higher rents. But market watchers remain guarded, noting the additional space coming on stream in the next few years. According to the Urban Redevelopment Authority (URA) yesterday, office rents based on commenced leases edged up 0.4 per cent in Q1 this year from the preceding quarter, reversing a 3.3 per cent drop that quarter from the one before. The rise in Q1 marked the end of a six-quarter fall that began in Q2 2008 as the global financial crisis unfolded.

Prices of office properties also rose in Q1, by 1.8 per cent quarter on quarter, compared with one per cent in Q4 2009. 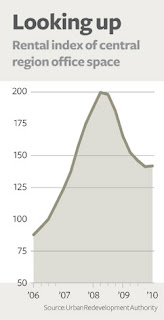 The office market stayed quiet until the second half of 2009, when tenants began a game of musical chairs and moved from older to newer buildings. As the economy outperformed expectations in recent months, some companies started to plan for expansion and signed on for more space. Early this month, for instance, Barclays Capital more than tripled its space commitment at Marina Bay Financial Centre (MBFC) Tower 2. Due to such activity, Q1's increase in rents is 'not a surprise', said Savills Singapore commercial leasing director Agnes Tay. Since January, rents at some buildings - particularly those with good occupancy rates - have been firming, she said.

Meanwhile, the island-wide office vacancy rate rose to 12.5 per cent in Q1 from 12.1 per cent the quarter before. The completion of 630,770 sq ft of office space at MBFC Tower 1 probably contributed to this, said CBRE Research executive director Li Hiaw Ho. He expects the vacancy rate increase to be transitional as the first phase of MBFC is almost fully leased. He noted that office take-up in Q1 was 236,808 sq ft, remaining in positive territory but less than the 301,392 sq ft in Q4.

According to URA, 1.02 million sq m of office space was in the pipeline at end-Q1. Of this, about 931,000 sq m of space will be completed between Q2 this year and 2013. In the same period, around 365,000 sq m of business park space will also be ready. The upcoming supply has capped consultants' expectations about rent increases in the next few quarters.

Said Mr Li: 'While there are compelling signs that rents have stabilised, an early return to rental growth might still be premature.'

New space supply, plus 'a substantial amount of secondary supply from tenants relocating to new mega- schemes, might limit rental recovery until next year'.

Things are also looking up for the industrial property sector. Rents grew 1.7 per cent in Q1 from the quarter before, and prices edged up 1.5 per cent. Shop space rents fell 0.1 per cent in Q1, but prices increased 1.8 per cent.