Prices within the means of the various income groups

THE hot issue of high property prices received another airing in Parliament yesterday, with the Government releasing fresh figures to show new flats are affordable to all first-time buyers.

In giving the numbers, National Development Minister Mah Bow Tan also addressed the issue of how findings can change when different base years are used to look at the HDB resale price index and household incomes. 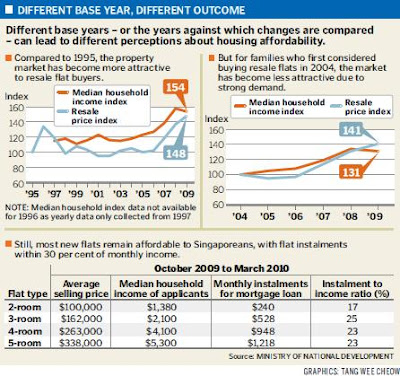 The issue of the relative pace of price and income increases first came under scrutiny early this month when Mr Mah released the two sets of figures in a Straits Times interview.

They showed that HDB home prices are not beyond reach. This is because the resale price index has risen by an average of 3.2 per cent annually from 1999 to last year, lower than the 3.9 per cent increase in median household income.

But opposition Reform Party member Hazel Poa later wrote in a blog post that the results would be different if the base year is changed from 1999, to say 2001 or 2006.

Mr Mah did not refer to Ms Poa, but said in his reply to Mr Lim: 'It is possible that prices of resale flats have risen faster than incomes when indexed against different years.'

Using more recent years like 2004 to index the growth, he said the an-nual growth in the resale price index exceeded income growth, owing to strong demand and the quick economic recovery (see chart).

But he also pointed out that if 1995 was used as the base year, it would yield a different result as resale flat prices rose by 2.8 per cent, lower than income growth of 3.2 per cent.

'Ultimately, what matters is whether at all times, first-time home buyers are able to afford HDB flats,' he said.

To that, the answer is 'yes', he said, as the Government has done two things to ensure new flats are not priced out of reach. One, new flats of different sizes and in different locations for different income groups are always available. Two, setting these flat prices so that they are well within the means of buyers in various income ceiling groups.

Elaborating on how new flats are affordable, he referred to a formula called the debt service ratio (DSR). It compares the monthly mortgage instalment to the monthly household income. The average DSR for new flats launched in the last six months when property prices surged ranged from 17 per cent to 25 per cent (see table). This applies to new flats in non-mature estates. For those in more central locations and mature estates, the DSR is around 30 per cent.

These figures are within the international benchmark for housing affordability, which ranges from 30 per cent to 35 per cent, he said.

But Nominated MP Paulin Straughan pointed out that the majority of flat owners seem to be using most of their Central Provident Fund (CPF) savings to pay for their home loans, with those living in three- and four-room flats having to top them up with cash. Will this lead to insufficient retirement savings, she asked.

Mr Mah said: 'I have to emphasise that buying an HDB flat is not an expenditure, it is an investment...because when you buy an HDB flat, at the end of the tenure of the flat or towards your retirement, that HDB flat is a very significant store of value.'

Citing a Department of Statistics survey, he said on average a Singaporean family has more than $100,000 in asset value in their flat. If that asset is monetised, they need not fear using up their CPF savings to pay for it.

'This is another vindication of our home ownership policy because if we were to use that same amount of money - 25 per cent of income - to rent rather than to buy a place, then at the end of 20 or 30 years, you will not be having this asset which you can use for retirement income,' said Mr Mah.

On whether the $8,000 household income ceiling for new flat buyers will be raised, he said the answer is still 'no'.

'We've a finite housing budget... and at the household income ceiling of $8,000 today, we're actually subsidising about 80 per cent of the population,' he said.