Circle Line: No plan to go full circle yet

THE name 'Circle Line' is a bit of a misnomer.

Even when all 29 stations along its 33km route are in use by some time next year, it will not be a full circle: A gap of about 4km long will still separate the HarbourFront and Marina Bay stations.

The Ministry of Transport has not ruled out closing this 'missing link', but is now taking a 'wait and see' approach. It said: 'We have to assess whether there's sufficient ridership to justify such a direct linkage, as there are already alternatives now through the current rail network.'

It will continue monitoring the situation, it added.

Dr Lim Wee Kiak, who chairs the Government Parliamentary Committee for Transport, said he believes closing the loop would 'make sense' and is glad the Government is not dismissing the option.

'Commuters will then be able to travel clockwise or anti-clockwise, and trains don't have to make a U-turn to go the other way,' he pointed out. 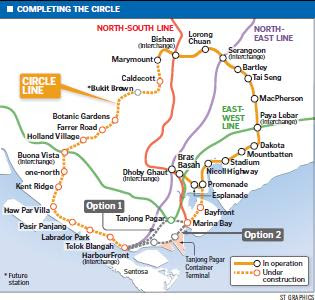 SMRT president Saw Phaik Hwa, noting also that a loop service will mean a quicker turnaround for the trains, said: 'We welcome rail extensions that bring greater accessibility to commuters.'

Making the Circle Line go full circle will particularly benefit commuters now in the south-west. Those living in West Coast, Pasir Panjang and Telok Blangah will be able to get to the Marina downtown area in one train ride, as opposed to transferring to the North-East Line at HarbourFront, heading north to Dhoby Ghaut and then south again to Marina.

Closing the loop will also get these commuters more quickly to and from Suntec City, Beach Road, the National Stadium and the Old Airport Road hawker centre without needing to switch lines.

The maritime executive said that closing the loop will give people like him a direct route to Marina and farther east without having to change to another train.

If the extension is built, it will not be the first. In 2005, the Government announced that the Circle Line would be extended to the Marina downtown, where the Marina Bay Sands integrated resort and other commercial and leisure developments are sited.

Transport researcher Lee Der Horng of the National University of Singapore (NUS) has asked his students to assess the merits of closing the loop.

Their conclusion? It should be done, in view of the proposed redevelopment of Tanjong Pagar port into a new downtown area the size of Marina Bay, which sits where the gap in the line now is.

The provision of a rapid transit system is crucial to the redevelopment of the area, said Dr Lee. He added: 'My view is that we should adopt a 'transit-oriented development' approach.' The term refers to building an urban development around a highly efficient transit system that is within walking distance for those who live, work or play in it.

But Associate Professor Anthony Chin, who specialises in transport economics at NUS, warned that bridging the Circle Line's 'missing link' should be weighed against other considerations.

Closing the loop will have several benefits to a group of commuters, he agreed, but pointed out: 'Like all transport infrastructure projects, the central issue is economic and financial viability. So until the port moves out and enough density is created, one will have a hard time justifying it.' The Government must weigh very carefully between addressing more pressing needs versus spending on closing the loop, he added.

The new downtown area proposed for the site where the port now sits was suggested by the Economic Strategies Committee. It suggested that when the port's current lease expires in 2027, it could be re-sited in, say, Tuas.

Construction industry sources estimate that the link - if it is to have four stops - will cost between $1.5 billion and $2 billion at today's cost.

Observers note that the Land Transport Masterplan has indicated that new lines can be built if they do not compromise the viability of the network. So, given that the viability of every individual new line is not a must now, the link could be built sooner rather than later.

The Straits Times understands that the Government has studied another option to closing the loop - by linking HarbourFront to the East-West line's Tanjong Pagar station, and then joining it to Marina Bay.