But CPI could hit 4% by Q4 this year, says MAS in nod to new pressures rising

Singapore's economy has more than regained ground lost in the downturn, with gross domestic product (GDP) now close to 3 per cent above its last peak in Q1 2008.

And the Monetary Authority of Singapore (MAS) says 'underlying drivers of growth are likely to remain intact', sustaining a high level of activity in the next few quarters, though growth momentum could slow.

However, a tightening labour market may add wage pressures to mounting inflationary ones. Consumer price index (CPI) inflation could thus hit 4 per cent by Q4 this year, MAS said in its Macroeconomic Review yesterday.

Two weeks back, MAS rolled out an unprecedented double tightening of monetary policy, citing firm recovery and emerging inflation risks. That same day, Singapore's official 2010 GDP growth forecast was raised to a range of 7-9 per cent.

A few private sector economists have already raised forecasts above this, on the back of unexpectedly strong Q1 data and soaring factory output. 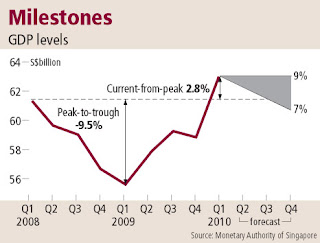 Double-digit growth is quite possible, several economists told BT, since a forecast of 9 per cent assumes zero quarter-on-quarter GDP growth for the rest of the year. As long as Greece and Portugal's unfolding debt woes do not spread to the larger EU economies, financial or trade impact on Singapore's growth should be negligible too, they said.

MAS's report did note 'sovereign risk in some of the industrial economies' as a risk, but without much ado. 'Confounding initial expectations', global conditions have improved significantly, MAS said, presenting an outlook far more optimistic than its last review had.

Recent rapid expansion of the domestic economy also meant that the 9.5 per cent in output lost from peak to trough (Q1 2009) has been recovered. Q1 GDP is likely to come in at around $63 billion, some 2.8 per cent above what it was at the peak in Q1 2008.

And this year Singapore's growth will be driven by trade-related activity, which comprises manufacturing, wholesale trade, and transport and storage, the latest twice-yearly report said.

Recovery of the global IT industry, which has now moved from inventory restocking and the release of pent-up demand to a 'healthy balance of firm demand and well-managed supply', is crucial. Rising consumer demand for laptop PCs, notebooks and smartphones (especially in China and the US), and corporate demand, as companies upgrade ageing systems and servers, will support Singapore's electronic and precision engineering clusters, the report said.

Asian demand, meanwhile, is expected to spur trade-related services like container activity in the shipping industry, and lift tourism receipts - all of which will offset residual 'pockets of weakness' in the chemicals, transport and construction sectors, the report said.

Though growth has been relatively subdued in the financial sector this year, gradual recovery will continue. Driving 70 per cent of its gains thus far were the core domestic lending and insurance segments, but recovery in the sentiment-driven cluster of stockmarket, brokerage and treasury, investment banking and fund management activity is now gathering pace too.

Also expected to quicken this year is the pace of job creation, although hiring demand will vary across industries, MAS said.

Labour supply constraints, seen in a resident unemployment rate now back down to pre-crisis levels, are likely to push wages up. This means 'industries that are unable to step up productivity quickly will face higher wage costs', which businesses might then pass on to consumers.

But about four-fifths of CPI inflation this year will likely stem from higher global oil and food commodity prices, and car prices, MAS said. These price pressures could build up to CPI inflation of 4 per cent by year- end. The official inflation forecast for this year is 2.5 to 3.5 per cent, and the projected MAS underlying rate (excluding private road transport costs), 2 per cent.