EVEN as Housing Board (HDB) flat prices show signs of moderating after frenetic rises last year, the HDB rental market seems to be bucking the trend with a sharp upswing in subletting deals.

The HDB's Resale Price Index rose by 2.8 per cent in the first quarter over the previous one - slower than the 3.9 per cent jump in the previous three months.

The level of resale deals sold above valuation also remained unchanged at a heady 93 per cent. Median cash-over-valuation was $25,000 - a marginal rise of $1,000 over the quarter before - while the number of resale deals fell 5 per cent to 8,484.

Experts say that the Government's aggressive moves to supply more flats are beginning to cool the sizzling market. 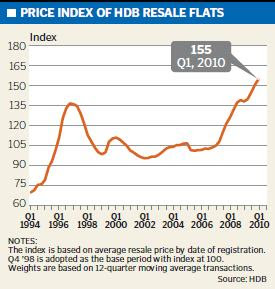 'The number of new build-to-order (BTO) flats to be launched by HDB this year in a variety of locations, supplemented by upcoming design, build and sell scheme and executive condominium projects, are expected to take some steam off the resale HDB market,' ERA Asia Pacific associate director Eugene Lim said.

Chesterton Suntec International's research and consultancy director Colin Tan noted the HDB plans to launch about 12,000 BTO flats in the first nine months of this year, up from its initial plan of the same number over the full year.

'The increased volume of transactions could be due to a higher number of renewal cases, higher demand for subletting of flats and a greater public awareness of the need to seek HDB's authorisation for subletting of whole flats,' HDB said.

Median subletting rent levels were stable from the previous quarter with only slight rises for two-room and five-room flats. But the central region bucked the trend with some hefty rent rises.

Mr Tan says this could be due to the integrated resort effect which might have driven prices up. 'Some people might also like to take a gamble and sell their properties at high prices and then rent to consolidate their cash,' he added.

Ngee Ann Polytechnic real estate lecturer Nicholas Mak said that the limited number of centrally located flats was a key reason for the jump in rentals though he added the data pool was small.

Mr Lim said with strong economic growth and confidence, resale HDB prices are set to rise by 5 per cent to 8 per cent this year.