Singapore's key interest rate has crashed to all-time lows and banks have been quick to capitalise on it.

The key three-month Sibor or Singapore interbank offered rate plunged to 0.546 per cent yesterday, crashing through the previous historical low of 0.56 per cent in June 2003. 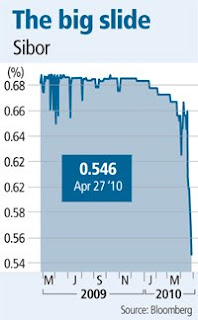 The bank's popular three-year fixed-rate package remains unchanged at 1.99 per cent a year.

'Based on the last 10 years' trend, three-month interbank rate peaked at 3.56 per cent in January 2006, and has shown to be volatile although it has stayed low for the last 1-2 years,' he said.

'This is one of the reasons why our three-year fixed-rate continues to be very popular with our customers, especially since our three and five-year fixed- rates are at a historical low,' said Mr Soo.

Many bankers said the three-month Sibor is near the bottom and that it is a good time for corporates to hedge their interest rate exposure.

Said Wee Wei Min, OCBC Bank head of treasury advisory: 'As long-term interest rates are close to historical lows, we are advising customers who have floating-rate loans to hedge their exposures. They can choose to hedge part or all of these exposures.'

Although this seems to be an obvious choice, some customers may choose to remain unhedged.

'This is because the short end rates are even lower and they will incur immediate high negative carry (difference between the three or six-months rates and the long end rates) when they lock in long-term fixed rates.'

Ms Wee said there are other hedging solutions like buying interest rate caps - akin to paying premiums to buy insurance to protect themselves from rising interest rates.

'It's close to the bottom, it can't go to zero. We're still an emerging market where there's a premium,' said Jimmy Koh, United Overseas Bank economist.

Investors also buy the Singapore dollar as a proxy for the yuan, which is expected to be revalued although no one knows when. But the yuan cannot be freely traded, unlike the local unit.

'If you like the yuan, you use the Sing dollar as proxy,' Mr Koh said.

The question is: how long before interest rates turn? Most say by year- end, as they expect the US to hike its rates then.

Gerard Feng, treasurer at Citibank Singapore, projects that three-month Sibor will rise to 0.8 per cent by year-end.

Selena Ling, OCBC Bank head of treasury and research unit, is looking at three-month Sibor rising gradually to reach one per cent by end-2010, 'on the assumption that liquidity management will likely take on an even more prominent function to drain excess liquidity conditions from further fuelling any potential asset bubbles in the making'.