PROPERTY owners big and small are on track to reap big benefits, thanks to the opening of 11 new stations on the Circle Line, according to a report.

Industrial landlords such as Ascendas Reit (A-Reit), Mapletree Logistics Trust (MapletreeLog) and Suntec Reit own large properties around these stations and will see gains from the new transport route, said Credit Suisse.

Its report also showed that property values of homes near these MRT stations – which opened last Saturday – have fared better than the overall real estate market.

The proximity of such homes to the MRT stations – the locations were announced back in 2003 – have been gradually factored in over recent years. 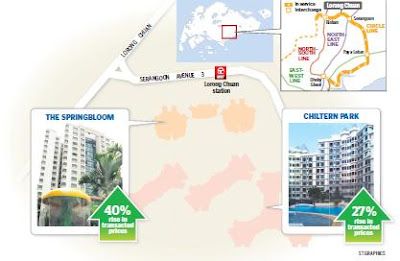 Private home prices at projects such as Chiltern Park and Springbloom around Lorong Chuan station, which opened last May, have risen 27 to 40 per cent since June 2008.

They outperformed the overall market during the period in anticipation of the Circle Line opening, said Credit Suisse.

Report authors Tricia Song and Sean Quek estimate that property near MRT stations fetch a 15 to 20 per cent premium to similar properties that are not close to them.

When the opening of the North-East Line coincided with the Sars-related economic downturn in June 2003, projects such as Compass Heights at Sengkang MRT station and Sunglade near the Serangoon station managed to hold up.

It also said property firms A-Reit and MapletreeLog, which have industrial assets near the new Tai Seng and MacPherson stations, will benefit from the Circle Line opening.

Credit Suisse is positive on both A-Reit and MapletreeLog shares. It has a target price of $2.24 on A-Reit, which closed at $1.98 yesterday.

It tips 98 cents for MapletreeLog, which ended at 85.5 cents yesterday.

Suntec Reit and its manager ARA were singled out for Suntec City’s offices and mall, which will enjoy a greater footfall due to its location near the Esplanade and Promenade stations.

Property developer Hongkong Land’s One Raffles Link and CityLink Mall, and the mega City Developments South Beach mixed project could enjoy similar increases in traffic thanks to the Esplanade station.

The new Nicoll Highway station will benefit office workers and patrons at The Concourse, Keypoint, The Furniture Mall and The Plaza, added the report.

But Chesterton Suntec International’s research and consultancy director, Mr Colin Tan, said that as traffic patterns change due to the new line, ‘shops lining the different routes will swop fortunes – more pedestrian traffic for some and less for others’.

‘For malls, the competition level is raised. If you’re better, you will grab a large market share, but if your mall is not as appealing, you will lose more traffic from your own surrounding catchment than you gain from others,’ he said.

The report also noted that new residential developments such as Waterbank @Dakota by UOL and Dakota Residences by Ho Bee near the new Dakota station, with a range of $900 to $1,400 per sq ft, have been well received by buyers.

Ngee Ann Polytechnic real estate lecturer Nicholas Mak said that although properties near stations tend to be more resilient, they are not immune to economic downturns and rental pressures.

Developers and sellers of homes near such stations can ask for a 10 to 20 per cent premium, but might not necessarily get it, depending on the property’s other attributes, he said.

The 11 new stations extend the reach of the first five Circle Line stations, which opened last May.

These 16 stations are expected to serve some 200,000 people daily, with that number rising once the last group of stations opens next year, including one at Holland Village.

The entire Circle Line project will cost $6.7 billion to develop.