A NEW lease on life is on the way for the iconic stretch of colonial buildings along Stamford Road.

Stamford House, Capitol Building and Capitol Theatre are part of a huge land parcel that will go on sale in two weeks’ time, after a property developer agreed to put in a bid of at least $100 million for the commercial site. 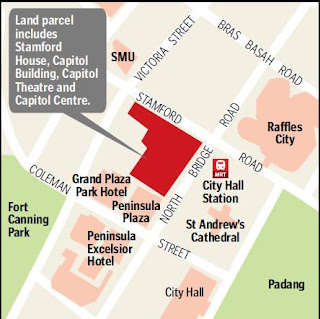 The bid triggered a public tender for the 1.43ha plot, which is located at the key junction of Stamford Road and North Bridge Road, and also includes Capitol Centre, said the Urban Redevelopment Authority (URA) yesterday.

Whichever developer wins the tender can tear down Capitol Centre, a dingy three-storey complex with shops, offices and schools opposite St Andrew’s Cathedral, and best known for its Gramophone and TMC Academy tenants. In its place, a new development of up to 10 storeys can be built, said the URA.

But the other three ‘historically and architecturally significant buildings’ will have to be retained and restored, it said.

Stamford House was built in 1904 in a neo-classical style by Mr Regent Alfred John Bidwell, the architect behind the Raffles Hotel. Capitol Theatre, which housed Singapore’s first cinema, was built in 1929, and Capitol Building, previously known as Shaw Building, was built in 1933.

Property consultants said the site will be an exciting one for developers, as it is a prominent plot in a prized location.

An interesting retail, lifestyle and hotel development could be created on the site, said Mr Li Hiaw Ho, the executive director of CBRE Research.

The land parcel, which was made available in December 2008, could have been triggered for sale now because of an expected upturn in the market for office, retail and hotel space, said Colliers International’s director for research and advisory Tay Huey Ying.

Prices for commercial and hotel land are still low because these segments have lagged the recovery in the housing market, but they are now seen to be at a turning point, she said.

Still, consultants expect only a handful of developers to contend for this site because of the many requirements involved.

The winning developer must use Capitol Theatre as an arts or entertainment-related performance venue. It must also build an underground pedestrian walkway, lined with shops and restaurants, to link the site to City Hall MRT Station and possibly CityLink Mall.

A quarter of the land parcel’s total gross floor area must also be used for hotel rooms, to add to the existing hotel cluster in the area, said the URA.

‘I think the site won’t have many bidders, because you need a developer who is experienced in retail and hotel development and who also has the capacity to deal with all the conservation issues,’ said DTZ’s South-east Asia research head Chua Chor Hoon. ‘It won’t be just any ordinary developer who can handle this.’

The URA is conducting the tender via a two-envelope system, in which developers submit their design proposals and tender prices in two separate envelopes. The URA will first shortlist the designs they approve of and then choose the one with the highest bid.

Recent sites sold this way include the South Beach and Clifford Pier plots.

Meanwhile, the Housing Board will also put up for sale an executive condominium (EC) site in Sengkang. A developer has submitted an offer of at least $103.8 million for the land, triggering a public tender for the site, the HDB said yesterday.

Bids for the 183,000 sq ft plot, at the junction of Sengkang East Avenue and Buangkok Drive, could come in between $154 million and $181 million, said Mr Nicholas Mak, a real estate lecturer at Ngee Ann Polytechnic. This would work out to $250 to $330 psf of total floor area.

Consultants said the interest in the land parcel is not surprising given the enthusiastic response from developers for two other EC sites released recently, at Compassvale Bow and Yishun Avenue 11.