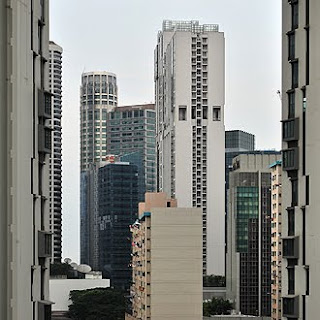 Two foreign banks offer new low rates in bid to entice mortgage market
TWO foreign banks operating in Singapore have just unveiled rock-bottom home loan deals in a bid to secure a bigger slice of the fast-growing mortgage market amid record private home sales.
Market observers say it is too soon to say if a full-blown mortgage rates war will erupt - but the latest rates are sure to get the attention of home hunters.

One key factor allowing super-cheap mortgages is the fact that a key interbank rate, which influences consumer loan and deposit rates, is tipped to stay at depressed levels well into next year.

With such cheap funds on hand, HSBC has just launched a mortgage package with an interest rate of Sibor plus 1 per cent throughout the loan term.

The package, available until Sept 30, is for both completed and uncompleted homes with a minimum loan size of $300,000.

It has no lock-in period and is for existing customers. Non-HSBC customers who want to get on the scheme must park at least $50,000 with the bank.

Sibor is very low now as it closely tracks the US Federal Reserve Fed funds target rate, which is near zero.

The earliest that the US Fed funds rate may be raised is in the second quarter of 2011, says Barclays Capital economist Leong Wai Ho.

Rates here are also near an all-time low because of measures taken by the Singapore authorities to keep plenty of liquidity in the system, given the global recession.

Bankers say some lenders have slashed the spreads they charge on Sibor-pegged loans to grab a bigger share of the red-hot home loans pie. This is in sharp contrast to several months ago when banks reportedly tightened lending criteria amid a bleak economic outlook and falling home valuations.

'We're not talking about market share as we're new, but we really want consumers to know about us,' said Mr Seah Boon Ching, head of consumer banking at SBI's Singapore branch.

He said the bank secured some funds at a 'very competitive rate' and decided to pass this on to consumers via a very specially priced home loan package to commemorate Singapore's National Day.

It remains to be seen whether a mortgage war will erupt.

Foreign banks do not have a large pool of cheap deposits to draw upon. Still, if Sibor remains low, they can tap low funding costs and so can afford to dangle cheaper loans.

RHB Bank Singapore's country head, Mr Lim Hun Joo, said the bank is not keen to compete only on pricing, as 'there is a real risk of the bank incurring losses as a result of simply chasing after growth in their loans portfolio'.

'In fact, there have been banks that have suffered losses only in recent years as a result of offering fixed-rate loans at rock-bottom pricing,' said Mr Lim, who declined to name these banks.

Another banker said the local banks 'have been relatively quiet so far', but if property transactions accelerate further and the economic recovery continues, then there might be a rate war as the trio 'scramble for market share'.

Still, banks do not always compete on interest rates alone and some offer innovative products that set them apart.

Standard Chartered Bank's MortgageOne Optimizer, for instance, comes with an offset feature where customers can use interest earned on deposits to reduce the interest payable on their home loans.

Meanwhile, Citi's Home Saver is an index-linked home loan that offers customers one of the widest selections of index tenures in the market, ranging from one month to three years.

------------------------------------
Bankers say some lenders have slashed the spreads they charge on Sibor-pegged loans to grab a bigger share of the red-hot home loans pie. This is in sharp contrast to several months ago when banks reportedly tightened lending criteria amid a bleak economic outlook and falling home valuations.