Receipts down 4.6% for services sector 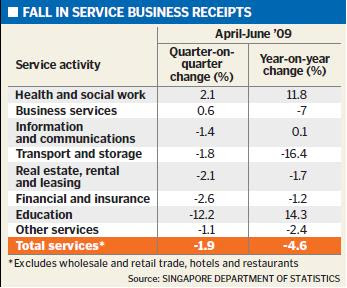 Recovery comparatively subdued, but expected to rally as global economy improves
MANUFACTURING may be on the mend, but Singapore's key services sector still seems sluggish despite the recent stock market rally and property boom.

Business receipts for companies from the sector - which makes up two-thirds of the economy - declined 4.6 per cent in the second quarter this year over the same period last year.

The sobering figures are from the quarterly Business Receipts Index for Services Industries, released yesterday by the Department of Statistics.

CIMB-GK economist Song Seng Wun said: 'It's reflective of the recessionary impact, with the effect of job losses kicking in.'

He added that the decline could be due to businesses charging less, and consumer behaviour being shaped by bargains, leading to smaller receipts. These receipts are the income from business operations, which include income from sales of goods, commission fees, services rendered, rental of premises, and machinery and equipment.

The index covers key components of the services sector but excludes wholesale and retail trade, hotels and restaurants. Unlike the headline-grabbing gross domestic product (GDP) numbers, or overall economic output, the index is not adjusted for seasonal effects.

Yesterday's data showed almost all industries receiving lower receipts in the second quarter over the first.

Firms in the education sector saw the biggest slide, falling 12.2 per cent. Companies in transport and storage, information and communications, real estate, rental and leasing, financial and insurance, and other services also had declines.

Health and social work services posted a 2.1 per cent rise in receipts quarter-on-quarter, and a hefty 11.8 per cent jump year-on-year. This could be due to the H1N1 flu outbreak.

Economists said the slump in real estate receipts despite the property boom could be due to time lags, and lower rents being a drag in the second quarter.

The financial segment may have been swayed by the tighter credit conditions, despite the sharp stock market rally in the second quarter.

They added that the latest data is a grim reminder that the marked improvement in the overall GDP was largely driven by manufacturing and construction.

Data out earlier this month showed the Singapore economy surged 20.7 per cent between April and June compared to the first quarter, with the services sector growing 8.7 per cent quarter-on-quarter.

The recovery has been uneven thus far, but such phenomena are typical of the initial phase of an economic rally, said DBS Bank economist Irvin Seah.

He added: 'Recovery in the services sector has been comparatively subdued, except for financial services. A more solid and broad-based improvement will be evident when the global economic recovery gains more momentum.'

Economists say the services sector should see an improvement this quarter and could revert into positive year-on-year growth early next year.

OCBC Bank economist Selena Ling said: 'This turnaround may only materialise in early 2010, with the opening of the two integrated resorts, and when consumers grow more confident about the sustainable resumption of global growth, especially in the developed economies.'