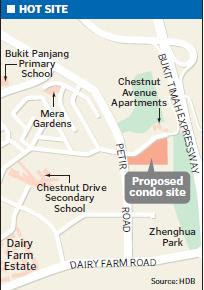 The bid came from a joint venture between City Developments' Sunny Vista Developments and Hong Leong Group's Hong Realty. The 22,700 sq m of land can accommodate about 450 flats.

Some of the other top bids are: Sim Lian Land with a bid of $113 million and First Changi Development, a GuocoLand subsidiary, with a bid of $93.38 million.

Frasers Centrepoint put in the most conservative bid of $77 million or $151 psf of gross floor area - still within the range consultants had projected last month.

This has been helped by the strong sales of suburban condominiums such as Meadows@Pierce in Upper Thomson and The Gale in Flora Road, experts said.

Still, the developers' bids indicate that they remain cautious. 'The pricing shows that the developers are realistic and not bidding at exceedingly high prices,' said property expert Nicholas Mak.

Based on the top bid, the estimated break-even price for the project should be about $550 to $580 psf, said Mr Tay. This means the eventual selling price might be about $650 psf to $700 psf.

Currently, resale prices of the nearby 99-year leasehold Maysprings range from $480 psf to $600 psf.

Prices at nearby 999-year leasehold and freehold projects such as The Linear, Hazel Park Condominium and Dairy Farm Estate range from $560 to $650 psf.

In a separate development, a group of investors has put up three landed housing sites for sale. Two are in District 15 while the third is in Lornie Road in District 11. These sites, zoned for two-storey bungalow or semi-detached houses, were purchased about two to three years ago when the market was booming.

'The property market growth is gathering pace and looking better these days. Prices have risen and there are not many sites around for sale,' said Mr Steven Ming, director for prestige homes at Savills Singapore, which is marketing the sites. The tender closes on Sept 17.