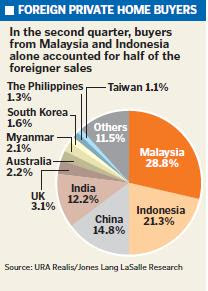 Buyers from the region are returning now that prices have corrected

THE number of foreign buyers in Singapore's property market shot up in the second quarter, but they are not quite the high-spending ones seen during the 2007 boom, according to property experts.

The globe-trotting high-spenders flocked to Singapore in droves then, helping to lift high-end prices even higher and setting record highs. It was not just individuals and funds - foreign developers also wanted a slice of the action.

A recent study by consultancy Jones Lang LaSalle found that foreign buyers - including permanent residents - lodged 1,662 caveats in the second quarter of this year, up from 489 caveats in the first quarter.

It was the highest quarterly sales figure since the third quarter of 2007 when 2,444 caveats were lodged.

In the second quarter of this year, the proportion of foreign buyers to Singaporeans and corporate buyers rose to 22 per cent, from 17 per cent in the last quarter.

It hit about 30 per cent during the previous boom.

Jones Lang LaSalle head of South-east Asia research, Dr Chua Yang Liang, said foreigners are beginning to return now that the worst of the financial crisis seems to be over and property prices have corrected.

'The price correction following the Lehman collapse last year has brought average resale values of non-landed prime properties in Singapore down 31 per cent from the peak. As long as prices remain stable and do not increase too drastically, foreign buying interests can be expected to continue,' said Dr Chua.

More foreigners bought higher-priced properties of between $1.5 million and $5million from April to June, compared with the first quarter, when most foreign buyers bought homes in the $500,000 to $1 million bracket.

But there was only a moderate rise in the number of those who bought homes priced at $5 million or more.

The largest group of foreign buyers here is still the Malaysians but Singapore also draws buyers from Indonesia and, in recent years, from China and India.

'We are seeing more foreign buyers from around the region, but not so much yet from the rest of the world,' noted Savills Residential director Phylicia Ang.

Market experts say more will come once there are clearer signs of recovery.